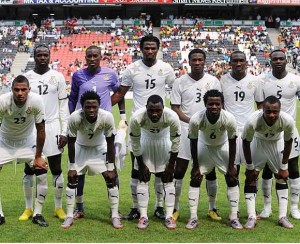 GhanaÂ coach Goran Stevanovic has named Jordan Ayew and the local league's leading scorer Emmanuel Baffour in a 25-man squad for the 2012 African Cup of Nations, MTNFootball.com can exclusively reveal.

Turkey-based striker Dominic Adiyiah and Quincy Owusu as well as goalkeeper Richard Kingson were axed from the squad.

BristolÂ Cityâ€™s in-form winger Albert Adomah will be disappointed that he could not make the team for the tournament inÂ GabonÂ andÂ Equatorial Guinea.

Former Germany youth international Charles Takyi gets his place in the squad as he joins the number of players hoping to make their debut in Africaâ€™s flagship tournament.

Home-based goalkeepers Daniel Agyei and Ernest Sowah will swell the number of home-based players in the squad to three as they take Kingsonâ€™s place.

Kingson pays the price for being without a club for more than six months.

New Edubiase striker Emmanuel Baffour, who has scored 11 goals in 11 matches, is part of the 25-man squad to be unveiled on Thursday.

Jordan Ayew, the son of legend Abedi Pele, will also be included in the squad following his excellent showing for French side Marseille.

The squad is good mix of experienced and young players with John Mensah leading out his colleagues for their camping inÂ South AfricaÂ early next month.

The 25 selected players will head to the South African city ofÂ RustenburgÂ for camping ahead of the competition which starts on 21 January.

The coach wanted to take 23 players to camp in South Africa but he was convinced to add two more which might have paved the way for Baffour to join the team.

The Black Stars have been drawn in Group D where they will layÂ Guinea,Â MaliÂ andÂ Botswana.