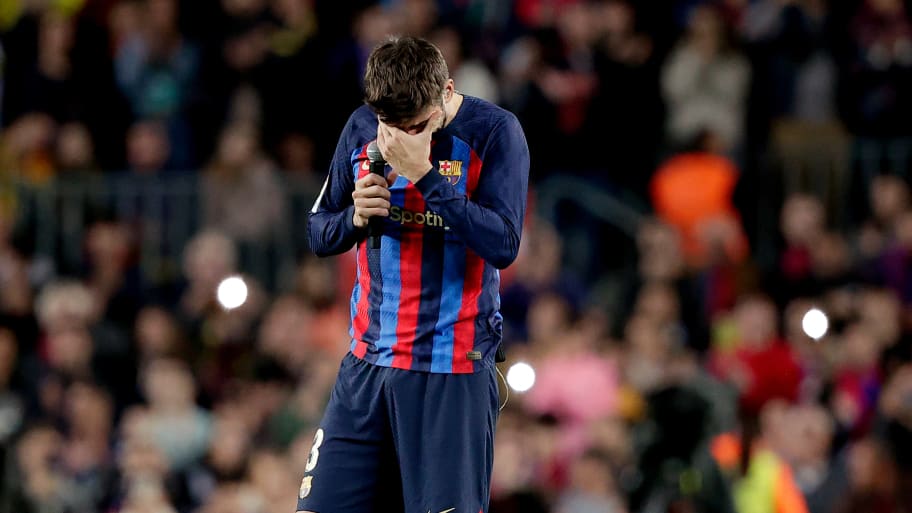 Pique, 35, shocked the football world this week when he announced that Saturday's clash with Almeria would be his final outing in a Barcelona shirt, and that he would be hanging up his boots with immediate effect.

Pique's retirement dominated all pre-match discussion going into the game, which turned out to be a rather low-key affair as the Blaugrana breezed to a 2-0 victory.

Pique was substituted shortly before full-time, allowing the defender to revel in the love of the Barcelona supporters in the stadium and moving him to tears.

Speaking after the game, left-back Alba offered his thoughts on his teammate of 10 years.

"I feel sorry. I'm grateful for everything he's given to all of us," Alba told reporters after the game.

"He's done a lot for the club. In the end it's a shame. His absence will be noticed. Not only in football, but in human terms. It is the law of life.

"He has left his soul in every game. It's a shame. An important piece of the dressing room is leaving. We are going to miss him a lot. People realise and are aware of everything he has given Barcelona. Let's try win titles to dedicate to him."

Alba also admitted that even Pique's teammates were caught off guard by the timing of Pique's retirement.

"The mentality of the match has been different," he said. "We played for the three points. We didn't know that he would give the news so soon. It was a very hard game. It was a difficult day, different."

Also quick to pay tribute to Pique was midfielder Busquets, who has played together with Pique since 2009.

"Gerard leaves a spectacular legacy. He has made history," said Busquets.

"He has gone out of his way for the club. He has created an incredible atmosphere. He is the example of what a Barça player is and what he has to do."

Pique, Alba and Busquets have won an array of titles together for Barcelona, including five league titles and the Champions League in 2015.