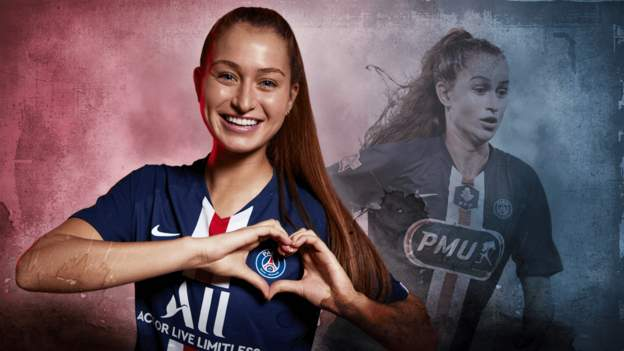 Jordyn Huitema talks about her unique rise to the Canada senior team.

"In five years' time, I want a big trophy under my belt. Whether it's a World Cup, an Olympic gold or a Champions League medal."

There are plenty of footballers with such career aspirations. However, the list of those capable of turning the dream into reality is perhaps a very small one.

Somewhere on it, though, would be the name Jordyn Huitema, of Paris St-Germain.

"I really want to take the next few years to develop and become the best player I can," the 19 year-old tells BBC Sport from her training base in Paris.

The Canadian is barely two years into her professional career but it's one full of potential, with the international goalscoring statistics to match. Eleven goals in 19 games at under-15 level; 20 in 29 at under-17; nine in 15 at under-20; and then 13 in 32 at senior level.

'Why's there a girl in a jersey?'View more on instagram

Huitema signed for Paris St-Germain in 2019 but her footballing journey began nearly 5,000 miles away in Chilliwack, British Columbia, Canada.

"It's a really small place," Huitema says of Chilliwack, "so if you knew someone who knew someone, you knew the whole city.

"But that was amazing because you get to be so close with everyone, including family and friends."

Although rich in community spirit, Huitema's town lacked the competitive edge she yearned for even at a young age.

She joined a boys' team aged 10, because playing for a local girls' team "wasn't competitive enough".

"It was unheard of at the time. I remember everyone giving me weird looks when I showed up at training. I'd turn up to matches and I'd hear people say, 'Why's there a girl in a jersey?'

"Even some of my team-mates would have something to say if I started a match or played more minutes than them. There were stares and comments but I kind of just silenced them with my performances," Huitema smiles.

The Canadian realised just how much potential she had a few years later. Aged 12, she travelled with her squad to a tournament in Seattle. In one game, she scored a consolation goal in a 7-1 defeat against a team called Surrey United - making such an impression, several opposition coaches approached her dad.

Huitema ended up joining Surrey, also from British Columbia, and a few months later she got a call up to the Canada under-15s squad, aged just 12. Often the youngest player in each age group, she progressed to a full international debut as a 15-year-old.

'They came to watch someone else'Huitema said "one day I'd love to" when asked about playing in the UK, praising the fanbase

Huitema's big break came while she was on international duty at the Algarve Cup in Portugal.

A representative from PSG was in the stands and it took just 20 minutes to convince them she was the real deal.

"We were playing against Japan and I think I got subbed on to the pitch after, like, 70 minutes," she says. "Someone from the club was there to watch my [Canada and PSG] team-mate Ashley Lawrence.

"After the game, he came to find me. He and my agent started talking and it kind of just went from there."

Knowing she was about to make a huge leap in terms of technical ability and general level of play, Huitema was keen to impress, and spent several months training with PSG before she was eligible to play.

She says: "I was at the point in Vancouver where it just wasn't pushing me enough. I'd say to this day it's an amazing environment for young people to progress in, but I wanted to thrive so I came to Paris."

Huitema is an integral part of the current PSG women's team, helping them reach last year's Champions League semi-final in which they lost 1-0 to eventual winners Lyon.

"I still think to this day I'm playing catch-up, these women are some of the best players in the world. When I came in I was pretty atrocious, my touches were going everywhere. I'm sure everyone was so frustrated with me because I just couldn't hold my own," she says.

A growing star in her own right, the 19-year-old forward often crosses paths with the stars from the men's team at official club events.

"I met Neymar for the first time like a couple of weeks ago and I didn't even know how to react. I tried to play it off cool but I definitely didn't. I feel like I'm turning red right now even just talking about it," she says.

Huitema signed a four-year deal with PSG and says she wants to use her profile to inspire others and help grow the women's game.

"I definitely say we're nowhere near where we deserve from a respect point," she says.

"I think there are some women out there who have accomplished some incredible things and it kind of gets swept under the mat because they are female."

'Me and Alphonso are two big personalities'View more on instagram

Off the field, Huitema has been dating Bayern Munich and fellow Canada international Alphonso Davies for four years.

The pair regularly star together in viral videos and have a joint Youtube channel.

"We were talking about it for a while and it started as a joke. We're two pretty big personalities and we wanted to show people that this is really the way we are," she says.

"I feel like most of our conversations are less about football and more just about life. I feel we're a big support system for each other."

The pair recently revealed that they started dating after meeting at the training facility they share while on international duty.

Huitema reveals that after six months of dating, Davies asked, 'Do you want to be Alphonso Davies' girlfriend?'

Despite describing the line as "bad", she still agreed.

And date nights are extremely competitive.

"When we were younger, we went on a lot of bowling dates," she says. "I'm really bad at bowling so he'd always win. But if we go ice skating, I grew up playing hockey so I'm obviously better at that.

"We even have a competition going over goals [scored]. He won a Golden Boot, then I won one, then I won another one, but since then he's been moved to full-back. So he's like, 'This isn't fair, I'm playing defence.'