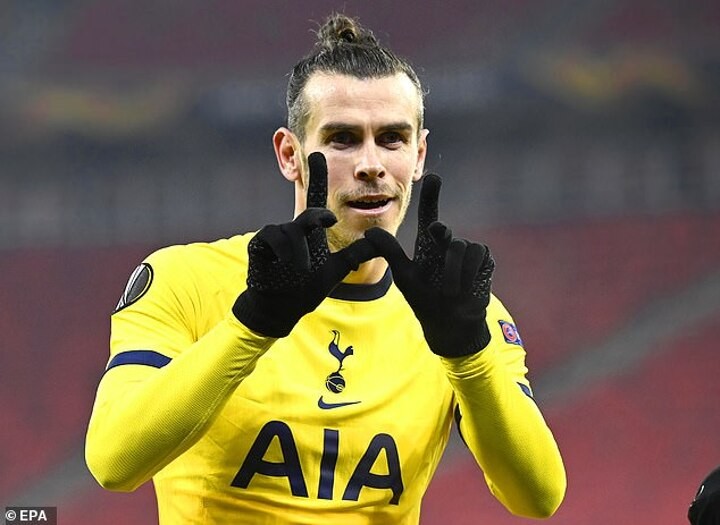 Jose Mourinho has claimed Gareth Bale is in his best shape since returning from Real Madrid and is finally free from lingering injury concerns.

Bale has looked sharper and hungrier in Tottenham’s last three games, scoring twice in the Europa League against Wolfsberger and making a positive impact from the bench in the 2-1 defeat at West Ham.

‘The mental is always a consequence of the physical,’ said Mourinho. ‘If a player feels great, if he is playing 100 per cent and if the feelings are all good, there are no psychological problems or fears.

‘When you have little worries and especially when you have a recent history of injuries, it’s normal to have some fears - and these fears have a consequence - but lately he has been fine.

‘He looks happier than ever, he looks confident. He has confidence back in training, the way he hits shots. His goal on Wednesday was a confident shot. A player with fear or negative feelings would never have hit that type of shot. To strike the ball that way, it means a lot. It means freedom: for this you need to be in a good condition and he is in the best condition since he arrived.’

It is only two weeks since Mourinho was at odds with Bale, criticising the Wales captain for a social media post about a ‘good session’ in training after requesting a scan because he could feel discomfort and was unable to play at Everton in the FA Cup.

Bale’s much-heralded return from Madrid on loan has been a disappointment but a spring flourish from the 31-year-old would lift faltering Tottenham.

‘It’s just a question of how many minutes he can play and how many days he needs to recover between matches,’ added Mourinho. ‘We trust him. Players with a lot of experience know their bodies better than anyone.’

The Spurs boss was also more positive than usual about Dele Alli, who has spent most of this season on the fringes and has suffered minor injuries.

‘I am happy with him,’ said Mourinho. ‘He came back and we had good conversations. He is training well, playing parts of matches. His condition is improving. We need him, we need them all. More than ever, we need a squad.’

Spurs have been drawn against Croatian champions Dinamo Zagreb in the last 16 of the Europa League.

Both clubs are confident they will be able to play the tie across two legs in their own stadiums.