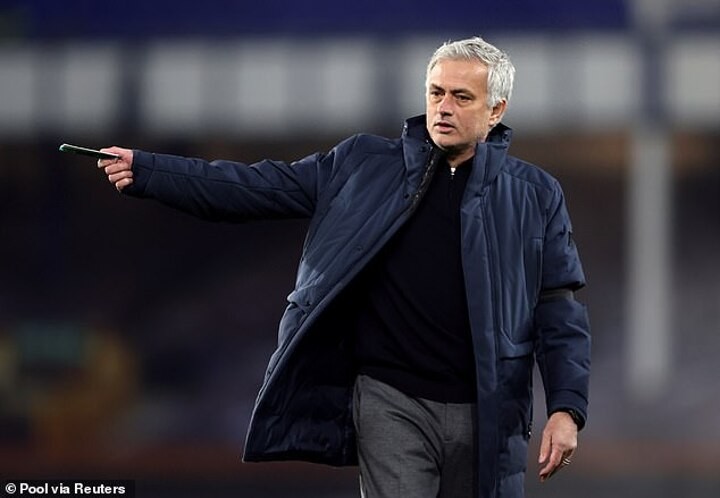 Tottenham boss Jose Mourinho has said he 'could not care less' about Paul Pogba's criticism of him as the pair's long-standing feud flared up again on Friday evening.

The Manchester United midfielder called out his former boss earlier in the day by saying Ole Gunnar Solskjaer would never turn on the players like his predecessor did.

Mourinho - who stripped Pogba of the vice-captaincy during his time as the United manager - responded to the Frenchman's comments after Tottenham's 2-2 draw with Everton by saying he wasn't 'interested at all'.

Pogba reignited his feud with Mourinho by telling Sky Sports: 'What I have now with Ole is different, he wouldn't go against the players.

'He wouldn't go against the players.

'Maybe Ole wouldn't pick them, but it's not like he puts them on the side like they don't exist anymore. That's the difference between Mourinho and Ole.

'Once I had a great relationship with Mourinho, everybody saw that, and the next day you don't know what happened. That's the strange thing I had with Mourinho and I cannot explain to you because even I don't know. So, yeah.'

When asked to comment on Pogba's remarks following Spurs' 2-2 draw with Everton at Goodison Park on Friday evening, Mourinho simply stated that he 'could not care less' about the midfielder's comments.

'I would like to say that I couldn't care less with what he says,' he told Sky Sports. 'I am not interested at all.'

Pogba helped Mourinho win the League Cup and Europa League during his first season in charge of the Red Devils.

However, the pair's relationship became toxic before the Portuguese coach was sacked in December 2018.

Despite Pogba claiming he was unsure as to why their relationship went sour, it appears Mourinho's decision to strip him of the vice-captaincy in September 2018 may have played a pivotal role.

The decision left the Frenchman furious and the pair were filmed arguing on the training ground just one month later.

Mourinho clashed with Solskjaer after the Norwegian manager criticised Heung-min Son for the role he played in Edinson Cavani's disallowed goal.

Cavani thought he had put United ahead before the half-time mark when he latched onto Pogba's pass and slipped it past Hugo Lloris. However, the goal was overturned following a VAR review after Scott McTominay's hand had made contact with Son's face in the build-up.

Furious about the decision, Solskjaer: 'If that was my son and he stays down and he needs his mates to help him up, he doesn't get food because that's embarrassing. The game's absolutely gone.'

To which Mourinho responded by saying: 'Let me tell you something. I am very, very surprised that after the comments that Ole made on Sonny, you don't ask me about it.

'And I told Ole already this, because I met him just a few minutes ago. If it's me, telling that player A B or C from another club, "If it was my son I wouldn't give him dinner tonight," or something like that, what would be the reaction?

'I just want to say, Sonny is very lucky that his father is a better person than Ole, because I think a father - I am a father - you have to always feed your kids, it doesn't matter what they do.

'If you have to steal to feed your kids, you steal. I am very, very disappointed, and like we say in Portugal bread is bread and cheese is cheese, I told Ole already what I think about his comments.'

Pogba decided to weigh in on the manager's argument by saying: 'I don't know what happened. I'm sure Mourinho said something that would make people speak, that's what he does.

'We got the result we wanted, Ole knows it and we enjoyed that moment because we know Mourinho and we know what he likes. We don't need this [war of words], we just focus on us.