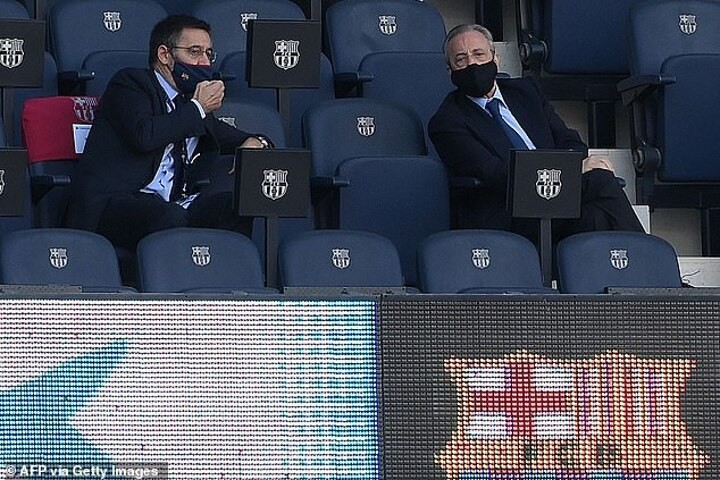 Barcelona president Josep Bartomeu has refused to resign following crunch talks on Monday as pressure grows on the under-fire chief to step down as tempers boil over in Catalonia.

Calls for the 57-year-old to leave his post have increased following a series of controversies surrounding the Spanish club, most notably the very public spat that led to Lionel Messi requesting to leave the club in the summer.

And following Barcelona's 3-1 loss to Real Madrid on Saturday, Spanish media had suggested the president may offer his resignation during a board meeting on Monday.

However, Bartomeu has opted to fight on, insisting that it would not be 'appropriate' to tender his resignation at this stage.

'There is no reason for me to resign,' he said in a press conference following the meeting. 'It's not an appropriate time to hand in my resignation. No one will be able to make the decisions if I decide to resign.

'The idea of stepping down has never crossed my mind. Never.'

Despite Bartomeu's insistence that he will not resign, the president may still leave due to a censure motion being brought against the chief.

Club members will vote on November 1 as to whether the 57-year-old should be replaced. 16,500 supporters have signed a motion to have Bartomeu removed from his position.

The vote will be held among 154,000 club members, with more than 66.6 per cent needed for Bartomeu to be ousted.

It has been a disastrous year for Bartomeu. The club's hierarchy were embroiled in a spat with the players during the suspension of football due to the covid-19 pandemic, with Messi hitting out over the club 'putting pressure' on players relating to wage cut talks.

The six-time Ballon d'Or winner shocked the world in demanding his exit from the Nou Camp in the summer, looking to end a near two-decade stay due to frustrations with Bartomeu and the board.

The president blocked a move away for the Argentine, who opted to stay and not to take the club to court.

Gerard Pique also voiced his frustrations with the board after signing a contract extension last week.

'I, as a Barca player, see that my club has spent money, money they're now asking us for [in salary reductions], to criticise us - and I'm not talking about criticising people outside the club, but current players - it's atrocious,' the veteran defender said.

'I asked [Bartomeu] for an explanation and he said 'Gerard, I didn't know about it', and I believed him. But then you see that the person who was responsible for doing this is still working at the club.

'That hurts me a lot. And I'm saying that here because I've already said it to the president, too."

After finishing behind arch rivals Real Madrid in LaLiga last season, Barca have endured a torrid start to the 2020-21 campaign.

Ronald Koeman's side are 12th after five games, winning just seven points from a possible 15.