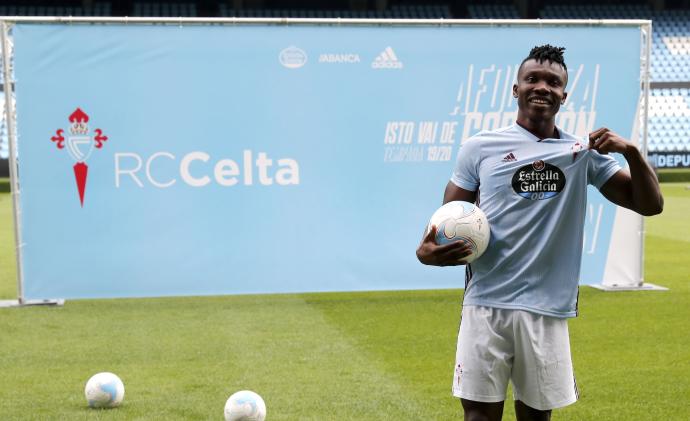 In a market of celestial summer signings marked by the returns, Joseph Aidoo could not be considered a priori as the most exciting reinforcement nor did it have a place among the most media.

However, as he accumulates matches and minutes he is firing the illusion with his desire, his ability to adapt despite the difficulties (led by the language) and his great performance in a position that has long been under suspicion in Celta as it is the central one.

If Néstor Araujo had become last season the most expensive defender in the history of the Vigués club, the record lasted a year.

Aidoo unbanked him with his signing in exchange for eight million. He arrived from Genk, where he had played the previous two seasons, and did so with the guarantee of being an absolute international with the Ghanaian national team.

That was going to be at the same time his first obstacle in his first foray into the League since he delayed the start of his preseason under Fran Escribá.

It was not until July 26 when the Ghanaian, last to arrive along with Nestor (whose international commitments were also extended by the Gold Cup dispute), landed in Vigo to start working with the rest of his teammates.

Although he had traveled before to sign his contract and be presented, his participation in the Africa Cup delayed his vacation and also his entry into the dynamics of the group led by the Valencian coach.

Aidoo had his first minutes of preparation with Celta against Union Berlin and continued against Tenerife and Lazio, starting in this last game, general rehearsal before the start of the League.

Despite this, on the first day, Escribá preferred to bet on a couple of central formed by David Costas and Néstor Araujo, leaving the Ghanaian on the bench next to the other central this summer, Jorge Sáenz.

Despite not giving him the title in that first game, in the previous one of the following Scribe he already made it clear that he had many expectations placed on him.

«He is a player with international experience, in a month we have him speaking Spanish, he works hard. At the football level, it also captures the type of movements we have better, it is aggressive, strong, fast, an excellent centre, ”described his coach.

The next day, against Valencia, he started as a starter and since then he has played 270 minutes, all three games from the second day to the fourth.

Its premiere was round, with victory of the team and goal to zero forming a pair of centrals with Néstor Araujo and it earned him to be included in the ideal eleven of the day of La Liga Fantasy in his debut match in the competition.

From there, two other meetings in which great performances, first against Sevilla and then Sunday against Granada in the worst-case scenario. With the team playing with one less, Aidoo fought each ball, cleared two good goal actions of the opponent to expand the score and even tried his luck in the face with a header without showing signs of throwing in the towel despite the circumstances of the game in no time

He made three dribbles, won two aerial balls and reached a pass percentage of 94% with a total of 34 points out of 36 attempts.

In what has been seen so far of him, Aidoo has revealed himself as a fast, forceful, safe and very fighter centre. He has a success in the pass in the first three league games of 93.4% and 6.7 punches on average.

He has not yet seen any card and has formed a partner with Nestor always except in the first minutes of the match of the fourth day, until the expulsion of Jorge Sáenz in his debut.

Everything indicates that Ghanaian and Mexican will repeat in the Metropolitan against Atlético next Saturday.

The language challenge after the first game of Aidoo, against Valencia, Araujo stressed the difficulty that his partner in the rear is still learning Spanish: «Sometimes it is complicated, but at signs and as we could we have tried to communicate. We will gradually correct things, ”he said.

The player himself spoke a few days ago to the press of his country on this issue that he hopes to solve as soon as possible. "Language is a challenge and I am learning it little by little", confessing that the first words he had incorporated into his Spanish vocabulary are "come on, boys" and "right."

In addition, he proclaimed that he is clear about his goal: «Keep improving and be constant to help the team».