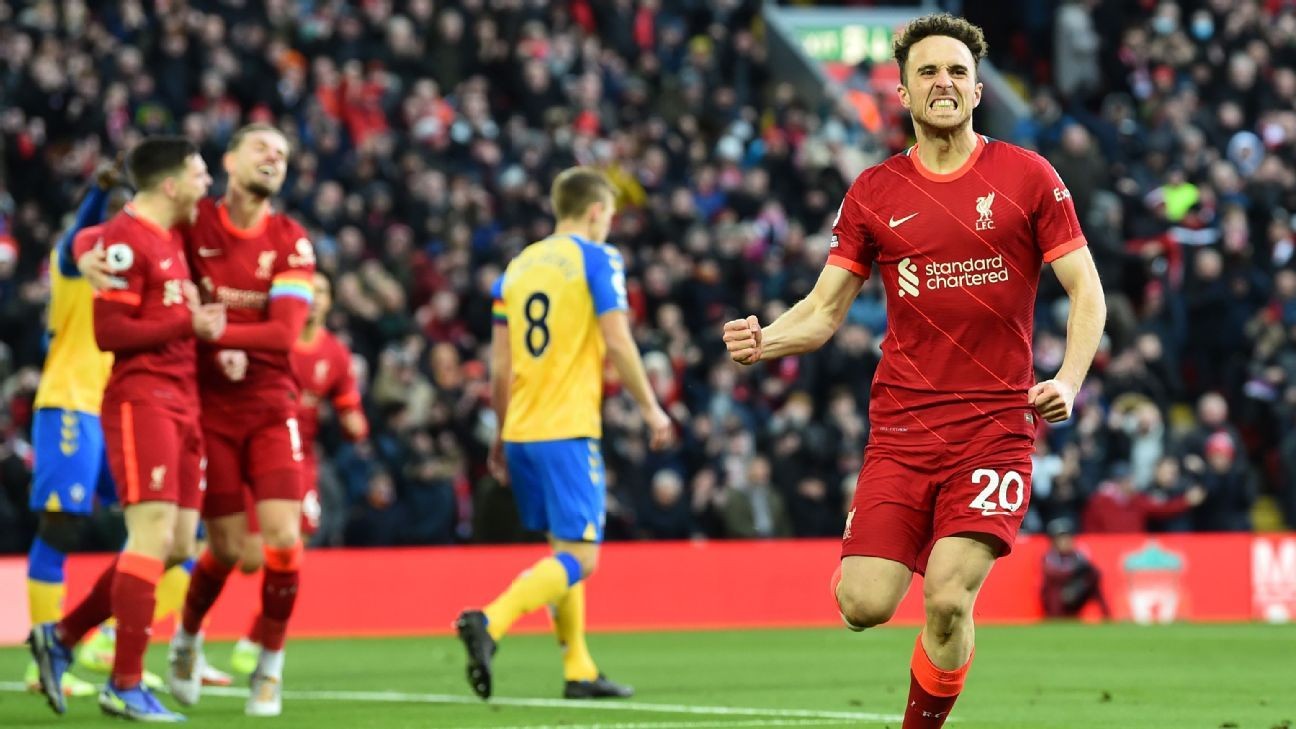 Liverpool continued their impressive form in the title race on Saturday afternoon with a 4-0 win against Southampton at Anfield.

The Reds got off to the perfect start with a goal inside the first two minutes, as intelligent build-up play between Sadio Mane and Andy Robertson was finished off by Diogo Jota. Southampton looked to respond, with Ralph Hasenhuttl's side playing higher up the pitch, and despite leaving themselves open to the counter-attack, Armando Broja wasted a good chance under pressure from Ibrahima Konate.

The visitors were soon made to pay for failing to capitalise on mistakes. Jordan Henderson's precise ball allowed Mo Salah to cut back for Jota's brace before Thiago's effort moments later was diverted past Alex McCarthy for Liverpool's third.

A double change from the Saints at halftime suggested there was a plan to edge their way back into the match, but any hopes of doing so were quickly banished when Virgil van Dijk found the time to volley home from Trent Alexander-Arnold's corner just seven minutes after the restart. Jota could have netted his hat-trick from Robertson's precise cross on the left-hand side, but the deflated response from Southampton allowed the Anfield crowd to relax as Liverpool cruised through the remaining minutes in the manner of a training match.

Liverpool were clinical in their brightest spells and punished Southampton for not making the most of their chances. The Saints couldn't deal with the attack of Jurgen Klopp's side on Saturday afternoon.

Some moments of complacency emerged after the first goal with mistakes conceding some promising chances, which a better side might have taken.

Manager ratings out of 10

8 -- Jurgen Klopp's team selection ensured control in the middle of the park while allowing the front three to flourish. The Liverpool manager also responded well to Southampton's adjustments throughout the game to see through a comfortable performance.

GK Alisson, 8 -- It could have been a different game without Alisson who was called upon on two crucial moments in the first half. A strong save denied Broja before the Brazilian goalkeeper then denied Adam Armstrong to maintain Liverpool's three-goal cushion.

DF Trent Alexander-Arnold, 7 -- Yet another assist for the right-back, whose second-half corner was volleyed home by Virgil van Dijk.

DF Ibrahima Konate, 7 -- The 22-year-old applied important pressure to Broja, who was forced off balance when getting his shot off inside the box, to maintain the clean sheet. An assured performance.

DF Virgil van Dijk, 7 -- The Netherlands star looked serene throughout the 90 minutes in defence. He will be delighted to be back into scoring form, with his second-half strike his first goal for the club since September of 2020.

DF Andy Robertson, 8 -- A bright performance overall. Scotland's captain looked sharp as he continues to work his way back to fitness, and he capped the day off with an assist to get Liverpool off and running.

Jota scored twice as the Reds cruised to an easy home win over Southampton on Saturday. Andrew Powell/Liverpool FC via Getty Images

MF Fabinho, 8 -- Southampton struggled to play through the midfield areas and that was largely down to the influence of Fabinho. The Brazilian reacted quickly to loose balls and didn't look to lose a single duel.

MF Thiago, 7 -- A second goal in the space of a week for Thiago, who is beginning to find his best form of the season. Despite a couple of passes that failed to find their intended target, the Spain international was always looking to move the ball progressively to start attacks for the front three.

MF Jordan Henderson, 7 -- The captain was vital in Liverpool's second goal and Henderson displayed his calmness when the crowd urged him to shoot, instead opting to pick out Salah, who helped Jota to an easy finish.

FW Sadio Mane, 8 -- Southampton struggled to pick up Sadio Mane who seemed to be afforded acres of space during counter-attacks, though he wasn't found by his teammates delivering the final ball. Link-up play with Robertson on the left side proved to be a regular route to goal in what was a faultless performance.

FW Diogo Jota, 8 -- Jota could have had three goals in the first half as he continued to find space in Southampton's box throughout the match. He had a final chance for his hat-trick in the second half but couldn't finish Robertson's cross.

FW Mohamed Salah, 8 -- It's rare that we see the Egyptian forward finish a game without a goal, but his overall play still played a significant part in Liverpool's win on the day. Salah's movement created space for his teammates, while Southampton players couldn't get near him when on the ball.

MF Alex Oxlade-Chamberlain, 6 (Thiago, 59") -- The 28-year-old is in bright form and maintained Liverpool's energy in the middle of the park, though he could have done better with his effort that went straight at the goalkeeper.

MF James Milner, 6 (Henderson, 67") -- Took the captain's armband as he came on for Jordan Henderson and eased Liverpool through the rest of the match.