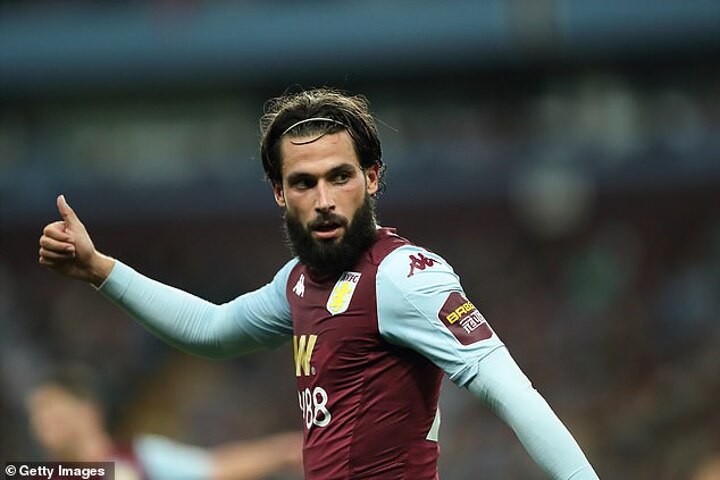 Former Aston Villa midfielder Jota claims he has more respect for Danny Drinkwater now after he apologised for headbutting him during a training session last season.

Chelsea outcast Drinkwater spent the second half of last season on loan at Villa Park, but made only four appearances.

His time in the midlands was overshadowed by the training ground bust up he had with Spaniard Jota in March earlier this year.

But Jota has moved on from the incident now, and has accepted that his former team-mate made a mistake.

'Of course I was angry at first, even if these things happen a lot in football', he told The Athletic.

'But Danny called me straight after and apologised. I could see that he felt so, so sorry about it.

'He called me a lot of times and said that he was angry with himself and angry that he did it.

'I respected him a lot after that and I think more of him now because it's easy to do a mistake but the difficult thing is saying sorry. I don't think he deserves people to say bad things about him for one moment only.'

Drinkwater has admitted his fitness was lacking due to so much time without first team football, and said last month that his his frustration turned to anger after a 4-0 defeat at former club, Leicester - the final game before lockdown.

'I was thinking "Jesus, I've just been back to somewhere I had so much success and I couldn't get on the pitch. This is embarrassing",' Drinkwater told The Telegraph. 'I got some stick from the fans and I woke up and I was raging. After training I planned to go and speak to Dean Smith about things, but then I went and headbutted Jota.

'We were on the same team, that's how stupid it was. I've never done that, I've never laid someone out before. It was ridiculous.

'I apologised straight away and I had to go home. I texted him straight after to apologise and take full responsibility. I Google translated it into Spanish as well to make sure he'd understand.'

Earlier in the 2019-20 season, Drinkwater was on loan at Burnley but only played twice. Shortly after joining, Drinkwater was attacked in a club he visited during an international break.

In April 2019, Drinkwater was charged with drink driving after crashing his car. In the 2018-19 campaign, he didn't play once under Chelsea boss Maurizio Sarri and admits he had lost interest in football.