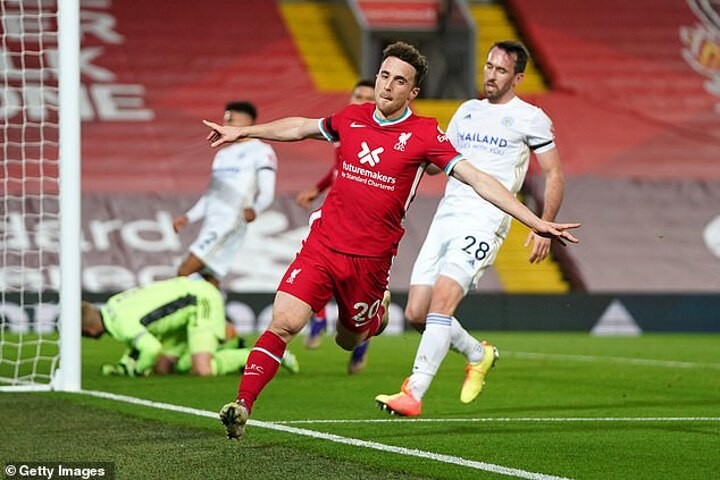 A section of the Liverpool fan base were fuming when Chelsea secured long-term target Timo Werner for £47.5million.

They moaned that the Premier League champions were resting on their laurels, failing to push on and strengthen, to consolidate their place at the top.

For whatever reason, the trail on Werner went cold and the Blues gleefully snapped up the RB Leipzig forward. Then came the twist. Seemingly out of nowhere, Liverpool splashed out £45m on Diogo Jota from Wolves.

Some supporters were appeased by the owners spending a significant amount, just hours after bringing in Thiago Alcantara from Bayern Munich.

But others had their doubts about the Portuguese 23-year-old, who had fallen out of favour under Nuno Espirito Santo.

Turning doubters into believers has become something of a mantra for Jurgen Klopp and it seems to happen rather a lot in the red half of Merseyside these days.

Even the most optimistic Liverpool fans believed Jota would come in as cover for the immovable front three of Roberto Firmino, Sadio Mane and Mo Salah.

The pre-conception where Werner was concerned was that having established himself as a top player for club and country, he would offer a legitimate challenge to the famed triumvirate if he joined.

But Jota has astonishingly already become almost undroppable for Klopp.

He has already scored nine times for Liverpool and his outrageous productivity led club legend John Barnes to say the winger is a perfect fit and slotted in better than Werner would have.

'Timo Werner is doing well and I’m sure he could have fit into what Liverpool wanted, but Liverpool want a player that wants to come to them,' he said, speaking to BonusCodeBets.co.uk.

'From Werner’s point of view, he would not have been guaranteed a starting place at Liverpool. Perhaps it's a decision he made and one Liverpool made in terms of wanting the player that would be happy to be a part of a squad as Jota is.

'He continued: 'Jota is playing well not just because he’s a really good player, but because he’s happy to not play every game and he’s got the right attitude. What Klopp does with all the players is he looks at a player that can fit into what he wants and he knew Jota could do what he wanted.

'I’m sure Werner could have done the same, so like with a lot of players at Liverpool I don’t think they’re improving, I think they’re at a club that suits their style perfectly and the way Liverpool play perfectly suits Jota.'

Barnes' assessment is supported by the statistics too. Werner may well go on to develop into a world class 30-goal-a-season man at Stamford Bridge but it is Jota who has started the better.

Werner has started 15 games in all competitions for Chelsea and scored one less goal than Jota (8), who has only made nine starts.

That means Jota's goal to 90-minute ratio is up at 0.9 with Werner on 0.6, although the German has the advantage in the assists category having provided three so far for his new team-mates.

Jota, on the other hand is surprisingly yet to deliver an assist for the Reds so far.

Despite the disappointing return in terms of assists for Jota, he's actually been out-performing Werner in the creativity department.

He's created 10 chances at an average of one every 90 minutes with Werner manufacturing 9 at 0.6 per game.

Werner's pace is one of his most talked-up attributes and the ability to go past a player is undoubtedly impressive but in terms of dribbling, Jota again has the edge.

There's an argument to be made that Jota had the advantage over Werner having already amassed plenty of Premier League experience at Molineux.

Werner is still bedding into a new team, in a new country, in a new division with a different style of football so it could well take him some time to find his best form.

That said, he cannot blame those factors on a couple of spectacular misses, one against Newcastle and the other Rennes in the Champions League.

It should also be noted that his goal-scoring stats are slightly padded by the three penalties he's slotted since taking over from Jorginho while Jota is not given the same responsibility for Liverpool.

Consistency wise, Werner has more of a pedigree having scored 28 goals in a Bundesliga campaign for RB Leipzig and slotted eight at international level since making his debut in 2017.

Jota only broke into the Portugal side last year and is yet to fully establish himself as a top tier player for his country, though all signs point to him doing just that.

Both Chelsea and Liverpool are expected to challenge for the title this season and it could be that their new signings have a major say in where the Premier League trophy ends up.

Jota has stolen a march on the man who many expected to line-up in Liverpool colours this season and it will be a fascinating sub-plot to follow as the season unfolds.