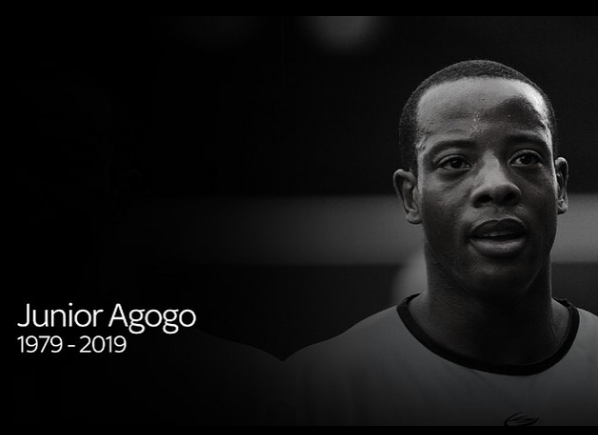 Death they say is inevitable. It is a part of life’s natural order. But that doesn’t make it any easier to deal with.

It is even more painful when an athlete or public figure dies at the pinnacle of his or her career.

From the tragic death of former Black Stars striker Junior Agogo to the mysterious demise of sports pundit ‘Evangelist’ Kofi Appiah Ghanaweb looks at some of the notable sporting figures who passed away in 2019.

The former Black Stars striker passed on after battling with a stroke from 2015 though he appeared to have recovered from the illness when he featured in a 2017 BBC documentary titled Speechless where he revealed his struggles with speech.

He was born in Ghana but spent most of his childhood in the UK. He then moved back to Ghana during his years in secondary school. He began his youth career at Sheffield Wednesday in 1995, moving up to the senior squad in 1997.

The GFA Executive Council Member and Eastern Region FA Boss under Kwesi Nyantakyi passed on after a short illness at the Nsawam General Hospital in the Eastern Region.

A close member of the family told in an interview with Footballmadeinghana said” He fell sick on Thursday but the sickness subsided after some medication. But this morning it got serious and by the time we got to the hospital, he was pronounced dead,”

The top Ghanaian sports journalist who had been in the profession for over two decades passed on after battling with an unknown ailment for over three months.

Appiah, popularly called Sports Evangelist was very vocal on radio and he was one of the ardent critics of the Ghana Football Association (GFA).

The late Appiah started his radio career as a gospel DJ and host at Channel R before he became a sports journalist.

The midfielder passed on at the Okomfo Anokye Teaching Hospital after he was knocked down by a motorcycle while jogging. President of New Edubiase United FC which the player had a contract with on November 23, 2019, confirmed it via a release.

"The New Edubiase United FC is saddened to announce the death of Abdul Malik Yakubu, a football player of the club who died at the Okomfo Anokye Hospital after he was hit by a motorcycle while jogging,"

Katanga in an interview with the press said “We recorded the death of unnatural cause on 31st December 2018, where one Justice Salasi Oko, a footballer of Ghanaian nationality came to Kabwe Youth Soccer Academy for trials but as he was running with the team he collapsed. He was rushed to Mahatma Gandhi and later referred to Kabwe Central Hospital where he died”.