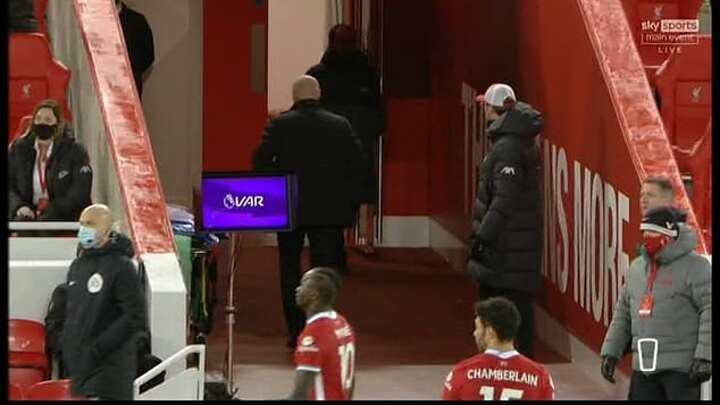 Jurgen Klopp chased Sean Dyche down the tunnel at half-time of Liverpool's Premier League tie with Burnley in an angry exchange between the two managers.

The Premier League champions were frustrated by Dyche's Clarets in the first-half of Thursday's clash at Anfield and tempers flared between the two teams when Burnley's Ashley Barnes become involved in a scrap with Fabinho.

After the pair tangled legs after the half-time whistle, players from both sides became involved in a scrap - with the anger spilling onto the touchline as the two managers started arguing.

Dyche raced down towards the changing rooms and his German counterpart followed him down the tunnel, gesticulating furiously.

The Burnley boss stopped in the tunnel to speak to Klopp where the arguing continued for a short while, before Dyche stormed towards the away dressing rooms.

Liverpool defender Fabinho was booked by referee Mike Dean as VAR checked the altercation between the Brazilian and Barnes, who was not cautioned despite picking up a yellow card earlier in the half.

The home side were frustrated in the first-half as they were held to a goalless draw by the Clarets as their long search for a Premier League goal continues.

The half-time whistle signalled 315 minutes without finding the net in the Premier League for Liverpool, a run that stretches back to four-and-a-half games.

Klopp's side did come close to taking the lead when Divock Origi ran clear through on goal late in the half, but smashed the crossbar when it looked easier to score.

Dyche's Burnley have history in frustrating Liverpool, with the Clarets picking up a 1-1 draw at Anfield last season - though Klopp's side were already confirmed as champions by that point.