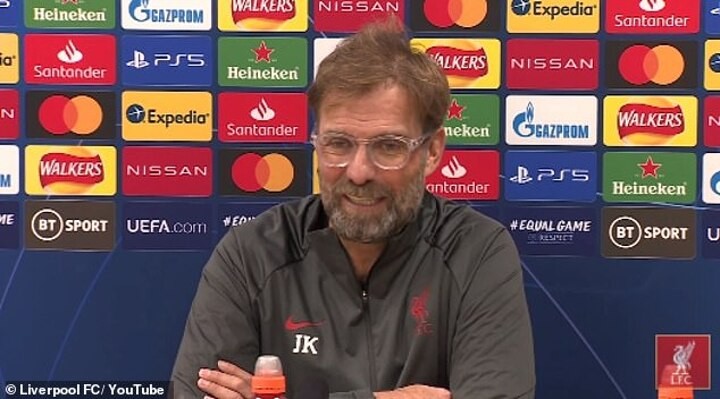 Jurgen Klopp has admitted he has been impressed with how his Liverpool side have coped in the absence of Virgil van Dijk.

Liverpool claimed hard-fought victories over Ajax and Sheffield United last week without centre back van Dijk, who required surgery on his knee after suffering a potentially season-ending injury in the draw at Everton.

Fabinho, who normally plays as a defensive midfielder, has been tasked with filling in for the injured Dutchman at the back alongside Joe Gomez and has received praise for adapting to the circumstances quickly.

Klopp, who confirmed he will be without Thiago, Naby Keita and Joel Matip for Tuesday night's Champions League game with Midtjylland, said Liverpool are doing as well as they could without 'the best defender in the world'.

Speaking at his press conference on Monday, he said: 'Every team in the world would miss Virgil van Dijk.

'He is the best centre back in the world. You play a game he gets injured and you play three days later so of course that's difficult to do because all the boys played together with him and we didn't have long for them to get used to playing without him.

'And Fabinho, who normally plays as a six, has had to come in and play with Joe.

'For that we did pretty well and that will get better 100 per cent because unfortunately everything in life takes time and defending takes time.

'We expect not perfection but not too far away from perfection. Everyone needs time to replace a massive person or player and so far we've done pretty well.'

The Liverpool boss also insisted that it does not give them any advantage because throw-in coach Thomas Gronnemark previously spent a spell working with Tuesday night's opponents Midtjylland.

'I think We are the Thomas Gronnemark group because he also worked with Ajax as well,' he said.

'We saw his influence when we analysed Midtjylland actually. He will be proud. Thomas is a professional, so he won't tell us the answers about them or what they are doing now. He is a super guy and has helped us a lot.

Klopp added: 'Since yesterday I know a lot about Midtjylland. I knew a little bit about the story of the club, using science different ways and it's a very interesting project I have to say.

'From yesterday I have watched a lot of games and I'm in the picture. They are good, very good. The 4-0 [against Atalanta] was not like this type of game. In my break, I was interested to go there for a while just to see what they do, but I signed for Liverpool so I couldn't. Even five years ago it was interesting.

'They are flexible as well and it's a challenge. They have my respect, we really respect them. We are not like we are Liverpool and big and they are just small Midtjyilland. They shouldn't be waving the white flag already because it is not like this.

'You aren't in the Champions League because you are a nice city or whatever, you are here because you deserve to be and then you show how good you are on the pitch.'