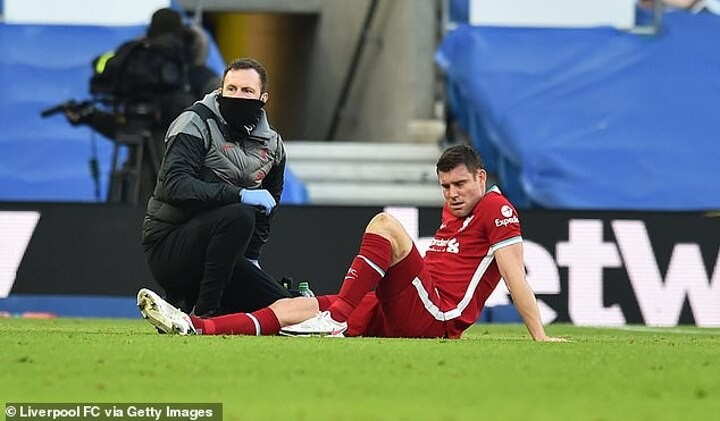 Liverpool manager Jurgen Klopp has been given a boost in his battle for five subs and his campaign to change the fixture schedule to reduce injuries after scientific research suggests he is right.

Klopp went to war after The Reds draw at Brighton, repeating his view that the Premier League should change its rules and allow five subs this season, because of fixture congestion, and calling fellow Premier League boss, Sheffield United’s Chris Wilder, 'selfish', for opposing it.

The outspoken coach has also crossed swords with broadcasters, appearing to blame BT Sport for a hamstring injury to James Milner, because his club had been chosen to play in the TV slot at 12.30pm on Saturday, after competing in the Champions League on Wednesday.

Klopp’s broadsides on both issues have become an almost weekly occurrence, but the embattled manager finally has some support.

An international sports science  study, which followed the temporary introduction of five substitutes last season, has concluded more subs would indeed reduce the risk of injury to players.

The researchers led by Gustavo Mota from the University of Triangulo Mineiro in Brazil, found the demands on footballers in competitive matches is much greater than in other sports, like basketball, in which the use of substitutes is unlimited.

And Mota concluded, 'this rule change may help to face congested schedules and benefit injury prevention’.

The Brazilian research team, who reported their work in the International Journal of Environmental Research and Public Health, also highlighted other studies which found fixture congestion increases the rate of injuries and players benefit from more than three days – 72 hours - to recover from matches.

Players who perform on a Wednesday evening and play again Saturday lunchtime will have around 62 hours recovery.

Dr David Archer, a sports scientist and expert in this field at the University of Sunderland, agrees with the Brazilians’ conclusions.

And he also agrees with Klopp that this season is unusual in terms of the impact on players, and should be seen as a one-off.

‘The main reasons are the disruption to pre-season and then disruption in the season [due to fixture congestion],’ said Dr Archer.

‘I can see this season being an exceptional one. Even if [the pandemic] rolls forward to next year it is more likely there will be a normal pre-season.’

During pre-season, conditioning work helps players to strengthen muscles and protect against injuries later on, such as hamstring strains.

Last season finished later than usual because of the suspension of matches due to the coronavirus pandemic and preseason was cut short. In addition, this season started later than usual so fixtures have been coming thicker and faster.

‘The players have not had the same level of preseason training, their preparation has been disrupted,’ said Dr Archer. ‘Then, they play games with short recovery and that affects the players as well.

‘It’s a double whammy for players in European football because it disrupts their preparation for weekend matches, too.’

According to Premier Injuries, which compiles a database of injuries in the top flight, there have been 133 muscle injuries in total over the first nine match days of this Premier League season, a 23% increase compared to the same period last year.

Two areas of controversy have emerged as a result: The number of substitutes allowed in matches and the recovery time for players who compete midweek and whose teams are then selected by the broadcasters for a lunchtime weekend kick-off.

This season, other European countries have continued with the five-sub rule and the EFL recently amended its regulations to follow suit.

However, the Premier League clubs have twice voted down the proposal, since the change is perceived as handing an advantage to the richer sides, whose squads have more strength in depth.

In recent weeks, a number of Premier League coaches have changed their tune and now say they would support the change, but any decision would still need a 16-4 majority among top-flight clubs and no date has been set to revisit the issue.

Dr Archer and his colleagues have previously documented how the intensity of the Premier League has increased dramatically in recent years, particularly in the number of short sprints players perform, which places even more strain on tired muscles, especially hamstrings.

So, would the expert support a move to more substitutes?

‘[The increase in injuries] is not surprising,’ said Dr Archer. ‘More substitutions would be helpful.’

Liverpool will have been selected for the 12.30pm slot on a Saturday three times by the end of the year. Would delaying a team’s kick-off time by a few hours if they have played on the Wednesday make a difference?

‘The more recovery time the players get the better,’ said Dr Archer, who points out the early kick off disrupts players’ routines making it harder to fit in pre-match massages and other conditioning work, which can help protect them.

‘Even two-and-half hours would make a bit of a difference. An early kick-off does make things much harder.’