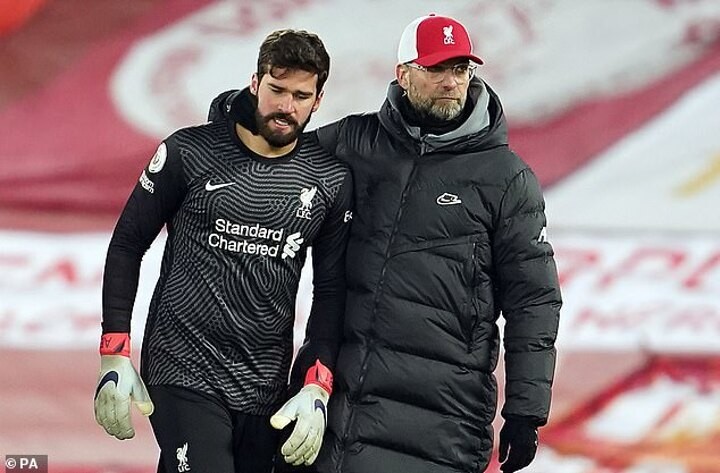 Jurgen Klopp set off as he always does when the half-time whistle sounds, dashing back to the sanctuary of the dressing rooms.

It is the same every game, he wants to get in quickly and gather his thoughts ahead of his team’s arrival before conveying his message. He will have video clips waiting to point out where tweaks can be made and what he wants to see improved in the second half.

Nothing tends to distract Klopp but, on this occasion, his focus slipped. Here – as he waved his arms and barked at Sean Dyche – was the compelling evidence to show how much the German has taken the dip in Liverpool’s sky high standards.

Klopp wouldn’t discuss it afterwards; Dyche was also circumspect when delivering his version of events, preferring to say that it was “just two managers fighting for their clubs; he is a top class manager but you are allowed to stand up for yourself.”

What triggered the exchange was impossible to tell. The first half had finished with the players being momentarily stopped from leaving the pitch so VAR could check an incident between Fabinho and Ashley Barnes, for which Fabinho was cautioned, but it didn’t really matter.

Klopp, who is an open book when it comes to body language, had spent the opening 45 minutes glowering and barking, as Liverpool found themselves persistently making the wrong decisions. Burnley, who were supremely well organised, revelled in frustrating the champions.

Frustration has been the word for Liverpool’s past month. On the back of a clueless performance against West Brom, when they fell into Sam Allardyce’s trap, Klopp has seen Liverpool’s grip on the trophy they won so spectacularly last season suddenly begin to loosen.

After a first home defeat since April 2017, a remarkable sequence that spanned 1369 days, the grip is even more tenuous. Ashley Barnes’s confidently dispatched penalty would have been cheered as loudly in Manchester and Leicester as it was back in East Lancashire.

It would be ridiculous to say Liverpool have lost it altogether, when there is still half a season to play and they are within shooting distance of top spot, but they have faltered at a time when their rivals have got into compelling rhythms and it has certainly led confidence to ebb away.

Intriguingly, Klopp refused to bring ‘confidence’ into his pre-match press conference on Wednesday, as he felt engaging in the topic would lead to headlines saying his team had lost it. Well, words were not necessary against Burnley – the huffing and the puffing and the lack of clarity said it all.

For a man who has masterminded two seasons that were as close to football perfection as you can imagine – 97 points, 99 points, winners of the Champions League and the Premier League – it is stinging that Liverpool are not dismissing teams with the ease they once did.

‘I cannot say we are not confident enough and then say I don't know why it didn't happen,’ said Klopp.

When something is gnawing away at you, preying on your mind and leaving you vexed, it is impossible to keep your emotions bottled up. In that exchange with Dyche, as invective was exchanged and fingers were jabbed, you saw Klopp’s exasperation come tumbling out.

He took the blame for this defeat and promised to work harder to find a solution. Again, the words are good but decisive actions are required. There is no place now for negativity or combustion. The only fight Liverpool want Klopp to be involved in is the one for the title: not a squabble with another manager.