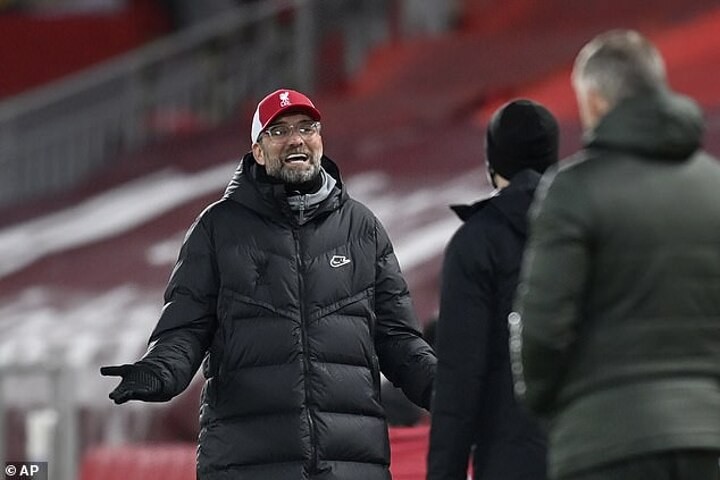 Jurgen Klopp has warned Liverpool are in a fight for Champions League qualification and wants talk of a title challenge momentarily placed on hold.

The champions have stuttered badly since Christmas and their 0-0 draw with Manchester United – coupled with weekend wins for Manchester City and Leicester – means they have dropped down to fourth.

Liverpool have gone 348 minutes in the Premier League since their last goal and the blanks being drawn by Mohamed Salah, Sadio Mane and Roberto Firmino – all of whom are short of confidence – is hurting their hopes of retaining their crown.

But that is the last thing on Klopp's mind at the moment. With Everton, Tottenham, Southampton and Chelsea all breathing down their neck, it is going to be a scramble to get into the top four this season and the German insists that is his main priority.

'I knew it always,' said Klopp, who was satisfied with Liverpool's performance. 'In the season we came second with 97 points, I only started thinking about winning the title when it was clear that we were in the Champions League. I know my job. I know what I have to do.

'I have to qualify for the Champions League and I know how difficult that is. You are right: that means this season will be a tough race for the top four that is for sure. Football fans are not the most patience species on this planet. They want to win each football game.

'I am not too different from that. But I am long enough in the business to know that there are more difficult periods. And this is not the most difficult period I have been through in my life, it's not even close. We have to be patient.

'We have points and we are in the bunch of a group of teams who fight for this and that is the job. That is what we have to do. It's not about 'if we don't become champion, it's not fun anymore.' That's not like it is. We fight for everything. I saw that tonight. That is all I need.'

Had it not been for two excellent saves from Alisson Becker in the second half, United would have celebrated their first win at Anfield since January 2016. The draw means they are now undefeated away from Old Trafford in the Premier League for 12 months.

There was plenty for Ole Gunnar Solskjaer to be content about but he was actually frustrated with his team's performance, saying: 'I don't think we played well enough. We didn't impose ourselves on the game. We created two massive chances and two brilliant saves by the keeper.

'You have to turn up, they are a good side and they have some injury problems but we didn't pounce on that which the injuries gave us. Coming away from here with one point and the players are disappointed is a good feeling.'