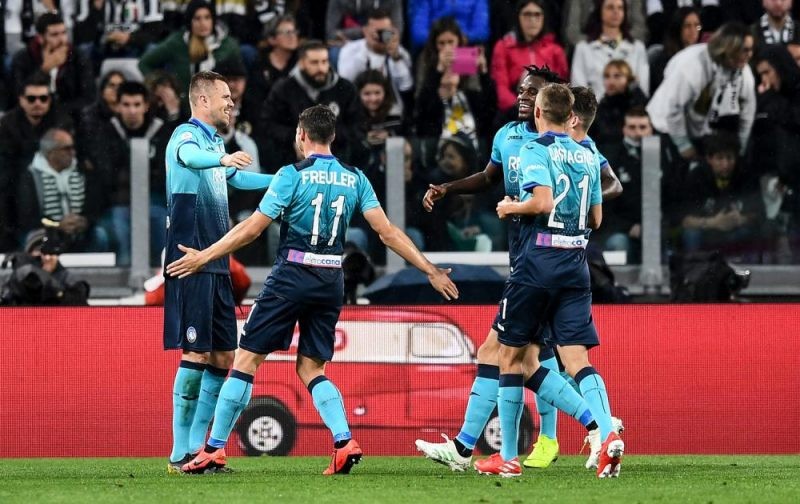 ALLIANZ STADIUM (Turin) – A 1-1 draw between Atalanta and Juventus meant something of a party atmosphere for both sides as the season draws to a close.

La Dea are now just three points away from confirming a place in next season’s Champions League with the result, and Juventus got to lift the Serie A trophy in front of their own fans.

Josip Ilicic gave Atalanta a deserved lead, putting into an empty net, but late in the second half Mario Mandzukic brought Juventus back on level terms. Federico Bernardschi was given a red card in the final moments of the match.

Next weekend Atalanta take on Sassuolo knowing that a win will be enough, with AC Milan one point behind the Bergamo side, in fifth. There was a festival atmosphere at the Allianz Stadium as the Bianconeri lifted the Serie A trophy, and they went close to scoring early on after a counter attack from Cuadrado who eventually found Cristiano Ronaldo, who could only blast high over the bar.

Robin Gosens then headed straight at Wojciech Szczesny from a couple of yards out, but the Pole beat the ball away towards Hans Hateboer but he could only shave the crossbar.

There were shouts for a penalty after the ball touched the arm of Alex Sandro following an Andrea Masiello header, but referee Gianluca Rocchi gave a corner after consulting VAR.

Chances were coming thick and fast for Atalanta, with Duvan Zapata next in line as he drove in on goal, shrugging off the challenge from Andrea Barzagli, but only just put his shot the wrong side of the post.

That was just a warning as Atalanta took the lead from a corner, which flashed across the goalline thanks to a touch at the front post from Masiello, leaving Ilicic with an easy tap in at the back post. After the break, Juventus went looking for an equaliser with Ronaldo going close, before Joao Cancelo blasted just wide from long range.

Ilicic went close from a freekick which needed tipping over the bar from Szczesny, then a flicked effort from the edge of the area by Federico Bernardeschi was saved by Pierluigi Gollini.

The equaliser did come through Mandzukic with ten minutes left to play. Cuadrado swung a deep cross in from the right, and almost on the goalline the big Croat got his foot on the end of it and nutmegged a surprised Gollini.

Not content with a draw Juve went all out for the three points and Bernardeschi tested Gollini with a rasping long distance drive which required a good low save. In the final moments of the game Bernardeschi was given a straight red card for a dangerous challenge on Musa Barrow.

A draw was all Atalanta really needed as they look to achieve a remarkable Champions League dream. Going into the final match of the Serie A season La Dea need victory over Sassuolo to cap an astonishing campaign. Coming into the match against Juventus of the back of the Coppa Italia defeat to Lazio was a test of nerve and La Dea passed it. Dominating for large parts and going ahead as well. In the second half if was backs to the wall as the defence, led by Masiello, thwarted the Bianconeri at almost every turn.

A GREAT SEND OFF FOR ANDREA

It was his last game in from of the Juventus fans, and possibly his last ever match for the Bianconeri, but Andrea Barzagli recieved a fitting send off. A guard of honour before the match, fans constantly chanting his name and then when taken off a standing ovation in from the Allianz Stadium.