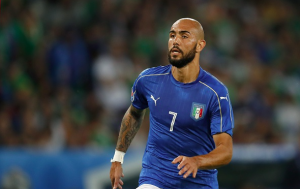 Despite interest from several foreign clubs, Juventus striker Simone Zaza has given his personal acceptance for an AC Milan switch.

The Italian international has been linked with German club Wolfsburg as well as West Ham United of the English Premier League, and also Italian rivals Napoli, but his next destination looks set to be the Rossoneri.

As reported by Sportitalia, Zaza has had direct contact with the Milan management and gave his consent to a transfer, with the club just needing to find an agreement with the Bianconeri.

The 25-year-old does not appear to be in Juventus coach Massimiliano Allegri’s plans for next season following his busy summer transfer market, especially the stellar purchase of Napoli talisman Gonzalo Higuain, so Zaza must likely look elsewhere for playing time.

He looked a different character last season to the performances he put on for Sassuolo a couple of years back, appearing just 24 times in all competitions and scoring eight goals.