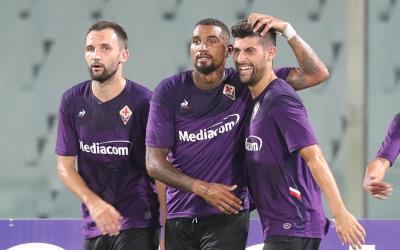 Forward Kevin Prince Boateng has promised his Fiorentina teammates that he will provide free dinner for a week if they beat Juventus in the serie A on Saturday.

The former Sassuolo forward is poised for the big game on match day three of the Italian top flight after losing their opening two games.

"I know how important this game is and, if we win, for a week we all eat for free. I already know which restaurants to go to. I expect some Florentine steak for free," he told the Republic.

Boateng has already scored his first goal for the club in the serie A. He scored in their 4-3 defeat to Napoli on the opening day.

The 32-year old heaped praises on winger Federico Chiesa,, who chose to stay in Florence despite interests from other clubs.

"Federico is happy because he understands that he stays here. He is young, I understand him. There are so many voices about you of great teams and you can feel a bit, but he stayed here, he must do well and he will do very well, he is very strong and wants to play the Europeans. Now he is calm and, if he is not, I put him in place, " he said.

The ex-Ghana international has been joined by Bayern Munich legend Frank Ribery at the club and Boateng explains he has a very good relationship with the French man.

"We understand each other because we are similar on many things. He deserved the Golden Ball ". He is very talented, but he needs time."