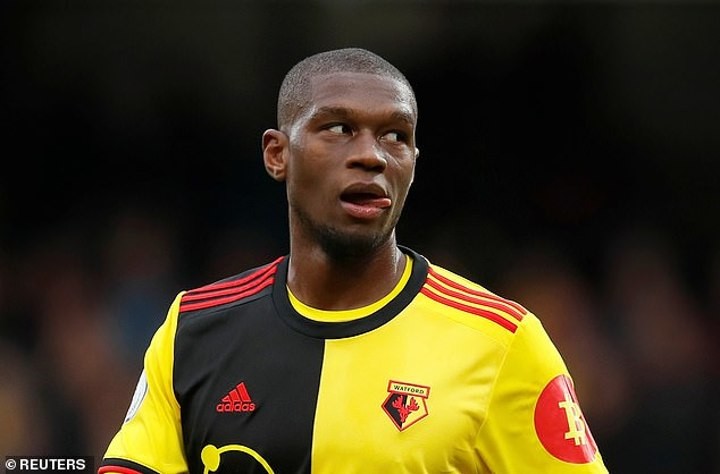 Watford defender Christian Kabasele has angrily reacted to a Sheffield United fan who accused the club of being opposed to the Premier League's Project Restart in an attempt to avoid relegation.

The defender joked that the club had a tactic of 'injecting players with coronavirus' after Adrian Mariappa and two members of staff tested positive for the virus this week.

Club captain Troy Deeney has also been vocal in his opposition to the season resuming, citing health risks to his family as the reason he has refused to return to training.

But a Blades fan suggested the club were doing everything they could to avoid suffering relegation to the Championship.

Chris Wilder's side are currently seventh in the table but still have a chance of making the Champions League after an impressive return to the top-flight.

The fan wrote: 'I’ve never had much opinion either way about Watford before this but they have behaved despicably throughout this all situation, the tactics employed to try to avoid a relegation are ridiculously transparent. I’d be embarrassed if I was a Watford supporter.'

This prompted a sarcastic response from Kabasele who said: 'So let me explain our tactic : we are doing one injection of #covid19 once a week. We draw the player/member of staff who get it like this we are sure that we never play again and avoid relegation.'

Nigel Pearson revealed on Friday that two more Hornets players were forced into self-isolation due to family members having the virus.

'One player through testing positive, two more because they’ve been in close contact with somebody else — even though their own tests came back negative — and we have the players who decided not to come in. That shows the complications we’ve got. I don’t intend to reveal names.’

As well as the risks to his five-month old son who has breathing difficulties, Deeney has highlighted the fears that many BAME players have about resuming their jobs, given that Covid-19 disproportionately affects people from those backgrounds.

He said: 'It only takes one person to get infected within the group and I don't want to be bringing that home.

'My son is only five months old, he had breathing difficulties, so I don't want to come home to put him in more danger.'

'For black, Asian and mixed ethnicities, they're four times more likely to get the illness, they're twice as likely to have long-lasting illnesses — is there anything extra, additional screening, heart stuff to see if people have got problems with that? No. OK, well I feel that should be addressed.'