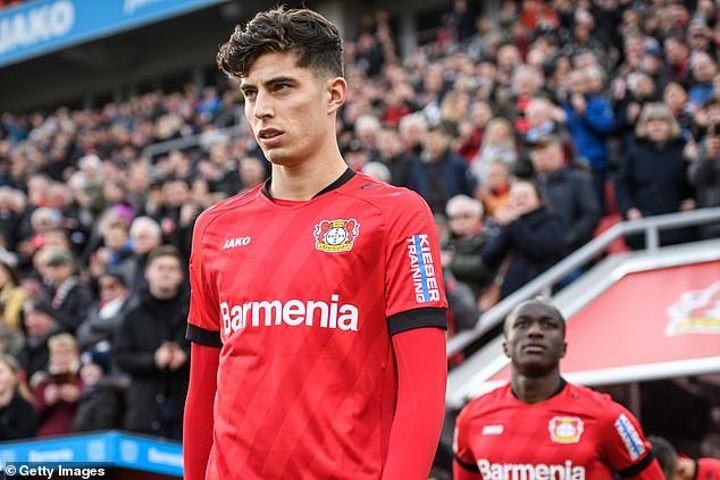 Bayer Leverkusen wonderkid Kai Havertz refused to talk about his future at the club after scoring another brace in the Bundesliga in a 3-1 victory over Borussia Monchengladbach.

Havertz has become hot property across Europe with Barcelona, Liverpool and Manchester United all showing interest in the creative midfielder.

Leverkusen have been clear that they are not going to accept any offer less than €100million for the 20-year-old as he has continued his incredible season as the Bundesliga returned to action.

When questioned on his future in Germany and his links to the European giants, Havertz told Sky: 'I do not like to say, of course, that there is a lot of speculation.

'I'm concentrating on this season and will see what happens afterwards.

'I am very grateful to Leverkusen and I don't want to mess it up in any way.'

The German international scored his second brace in two games as Leverkusen hit the ground running in their comeback after the coronavirus pandemic caused the suspension of the Bundesliga.

The club climbed to third place in the table, but could potentially drop down to fourth after RB Leipzig's match-up with Mainz on Sunday.

He added: 'We're happy about the win. We put it on ourselves to win here and we did that.

'We had to really give everything today and I think we deserved to win in the end.'