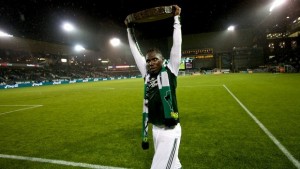 And when Portland Timbers midfielder Kalif Alhassan looked around and saw stiff competition at the midfield wings entering this season, the 21-year-old took matters into his own hands.

Having worked out during the offseason with his former club in Ghana, the Liberty Professionals of his native countryâ€™s GLO Premier League, Alhassan reported to his second MLS season ready to re-secure his spot after starting 27 games in Portland's midfield last year.

On Monday, in the Timbersâ€™ season opener against Philadelphia at JELD-WEN Field, Alhassan let his work on the field do the talking.

He recorded an assist and scored Portlandâ€™s third goal in a 3-1 victory, his first tally in a Timbers uniform.

And for his efforts, he was named the MLS Player of the Week by the North American Soccer Reporters on Tuesday, the first time a Timbers player has received the honor.

â€œI would say hard work,â€ Alhassan said of what the differences between the two seasons have been. â€œWeâ€™ve been working out throughout the preseason.â€

Still, Alhassan may have benefited from a little luck for the opportunity to start Monday night.

Newly acquired CameroonianÂ midfielder Franck Songoâ€™o was expected to be on the field before he suffered a knee injury and then left the team for Spain to deal with visa issues.

But Alhassanâ€™s complete performance showed heâ€™s ready to improve on his rookie season, when he recorded five assists by June but only one after that.

â€œI would say I feel better because John [Spencer, Timbers head coach] has given me the license to express myself in the context of the offense,â€ Alhassan said.

Portlandâ€™s midfield situation has been a source of much discussion among media and competition among players.

On Monday, Alhassan started on the right wing, with Designated Player Diego Chara and captain Jack Jewsbury in the middle, and Eric Alexander on the left.

With Songoâ€™o back with the team, along with Sal Zizzo, who has been cleared to train after recovering from knee surgery, Alhassanâ€™s spot in the starting 11 is anything but assured.

For now, Alhassan will enjoy his first goal, a looping right-footed chip from the wing that fooled Union goalkeeper Zac MacMath just enough to sail to the back of the net.

â€œWe just wanted to get that three points. And I think as individuals and as a collective, we worked hard. I would say this league is very, very tough. And having a great game Monday is great.â€