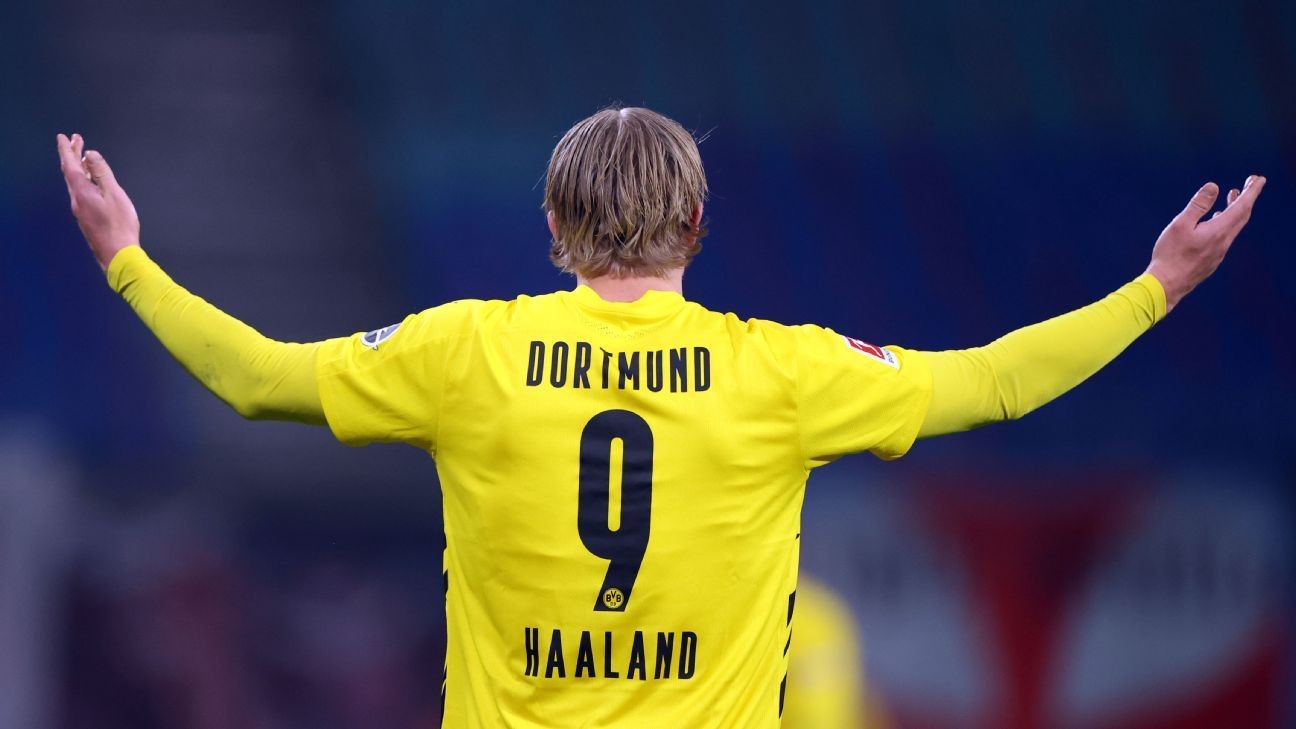 Favourites to regain the Premier League title this season, Manchester City have hit a rich vein of form with a record 18 wins in a row, yet one area where they have not been as dominant as in recent years is in front of goal. They've averaged above 2.5 goals per game in each of the past three league campaigns, yet this season it's down to 2.0.

One reason is the frequent absence of the club's record goal scorer, Sergio Aguero. But with the injury-hit Argentina international yet to sign a new contract, despite it expiring in the summer, and with Gabriel Jesus less than convincing as a replacement, having scored just four league goals in 17 appearances, the signs are that City may look to land a new striker in the next transfer window.

Why the Premier League's top clubs all want Brighton's Ben WhiteWhat Bayern will get from Upamecano after beating Europe's elite to sign himBarcelona have no money for transfers so how can youth help them out of crisis?

The COVID-19 pandemic has shaken the global economy and no one is really sure of the short-term implications, let alone longer term. Even the biggest clubs are strained financially and though City's Abu Dhabi-based billionaire owners seem to operate in a different environment to the rest, they may still feel the pinch. In July 2020, the Court of Arbitration for Sport (CAS) overturned City's two-year ban from European football that was imposed for breaching UEFA's financial pair Play (FFP) regulations, and focus on their finances has never been sharper.

Indeed, manager Pep Guardiola claimed in October that "if you decide to buy a striker, it has to be a striker in the league of Gabriel and Sergio but we cannot afford it. That is the reality." Yet this is a club that has spent close to £1.5 billion on players over the last decade and even managed over £120m last summer on Ruben Dias, Nathan Ake and Ferran Torres.

Although Guardiola has reorganised his attacking set-up to become less dependent on a classic centre-forward, a world-class addition in that position is still tempting given Aguero's success over the years. With the caveat that Barcelona's Lionel Messi is too old (at 34) and most likely too expensive (in terms of wage demands) to make a long-term impact at City, here are five star forwards that could help City back to their free-scoring ways.

Possibly the defining "power forward" of this decade, Haaland is a veritable goal machine whose remarkable numbers speak for themselves: 17 goals from 17 Bundesliga matches with eight from five Champions League outings this season. While the Norway international doesn't appear quite the refined, elegant, technically gifted striker that Guardiola tends to favour, logically City are likely to seriously discuss the option of signing him, especially given his father Alf-Inge's history with the club as a player.

There's no question that Haaland has improved his link-up play over the past year (one aspect, along with his aerial ability, which needed work). Sure, the 20-year-old is still developing, but the evidence shows he should be able to score, contribute and prosper regardless of footballing style or system. Moreover, from a commercial viewpoint Haaland is potentially one of the most marketable players in the world (particularly for the post Cristiano Ronaldo/Lionel Messi era), which is another plus point for any top Premier League club. If reports from Germany are to be believed, Haaland can leave Borussia Dortmund for a release clause of €75m in 2022, but City would be wise to get in early before the competition hots up.

Tottenham have no desire to let their star striker leave and recent reports that they have set a £150m valuation are wide of the mark, but the club look increasingly likely to miss out on the Champions League next season after a poor campaign under Jose Mourinho, so may find it more challenging to hold out if City come calling this summer.

Kane turns 28 in the summer and it might make business sense to consider offers as his contract expires in 2024, though Tottenham would be loathe to let him leave for a Premier League rival. From City's perspective, Kane's skillset and track record as a world-class "No. 9" mean Guardiola would look beyond any tiny technical shortcomings he might have when playing in City's system. Though equally, the club may question paying such a large amount to sign a player who is already at his peak and may not develop much further.

It's generally been assumed that the PSG superstar will eventually join Real Madrid and City haven't really been suggested as an option in the media. However, as Madrid struggle financially, City have surely weighed up a move as the 22-year-old's contract expires in the summer of 2022.

Signed for €145m (with further bonus payments of €35m potentially due to Monaco) in 2017, the 2018 World Cup winner with France is still weighing up his options. Should he stay in Ligue 1 (an extension is said to have been tabled) or settle in the more high-profile environment of the Premier League or La Liga? Aside from the theoretically awkward prospect of PSG's Qatari ownership letting their biggest star move to an UAE-owned rival, the multi-talented Mbappe would obviously improve any club he ends up joining, but City may find themselves out of the loop on this one.

Lukaku has stacked up an impressive 40 goals from 58 Serie A games since leaving Manchester United in the summer of 2019 for around €80m. After beating their Milan rivals 3-0 at the weekend, Inter look on course to win their first Scudetto for over a decade, though there have been reports in the Italian media that the club may face changes at ownership level soon. Such potentially disruptive developments may have a bearing on the club's ability to hang on to their most valuable players and Lukaku is certainly one of those.

The Belgium international's main forte is his pace and power, but he now appears a better link-up player than when he left the Premier League. In addition, he seems more comfortable using his right foot and also appears more aware in his tactical decision making. At 27, he is at a similar point in his career to Kane, but his history at City's local rivals United may limit his (or the club's) desire for a deal.

Surely the most Guardiola-esque player of the lot, the Portugal international is more of a drifting forward than a penalty-area poacher. Signed for €126m from Benfica in 2019, Felix is still some way off justifying that fee (though he's enjoying a fine La Liga season) but, at 21, still has time to make good on his immense potential.

Equipped with a lovely touch on the ball, his movements are as sharp as they are fluid and he has an outstanding natural understanding of the game, making him perfectly cut out for City's patient but incisive attacking game.

Typically fielded in a deeper second striker role by Atletico manager Diego Simeone, he's also able to play as a "false No. 9," dropping deep to create space and involve the wide and attacking midfielders. Atletico won't want to let him go, and he signed a contract through to June 2026 when he joined so the ball is in their court, but Felix could offer City a different kind of option to the rest.