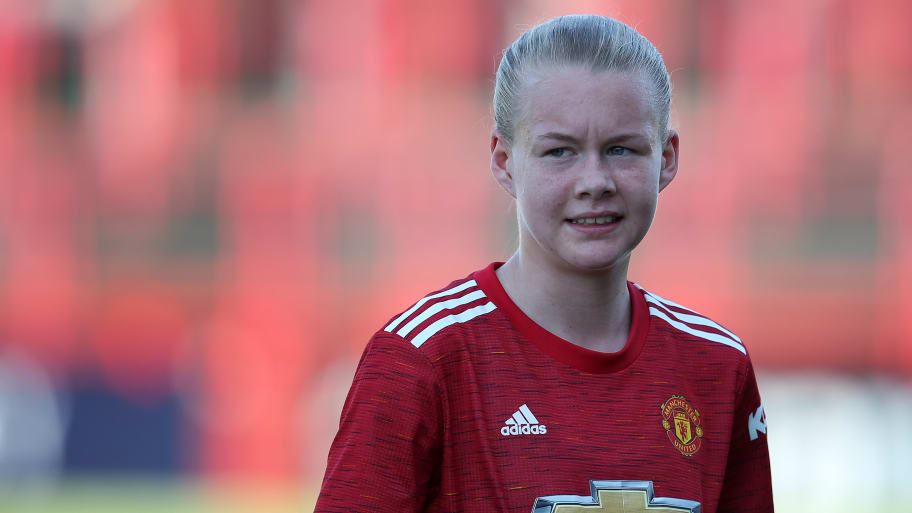 Karna Solskjaer has left Manchester United to join Norwegian club AaFK Fortuna, where she will sign the first professional contract of her career later this summer.

Solskjaer, daughter of United legend and former men’s team manager Ole Gunnar, was a major part of the club’s WSL Academy league and cup double this season and also made headlines when she was rewarded with a first-team debut in an FA Cup tie in January.

First reported in Norway, the forward’s registration has been logged in the Norwegian Football Federation’s system with Fortuna, who are based in the western city of Alesund and compete in the country’s second tier – confusingly, 1.Divisjon, one level below the top-flight Toppserien.

It is a permanent transfer, with Solskjaer initially joining on amateur terms before then starting on a professional contract from 1 August once Norway’s mid-season transfer window opens.

Fortuna earned promotion from the third tier, 2.Divisjon, in 2021 and are currently sixth a few weeks into the 2022 campaign. The hope is that 19-year-old Solskjaer may have a clearer path to more regular first-team football to take the important next step in her career.

United manager Marc Skinner previously described the step up from academy level to the first-team as ‘such a big gulf’, with the club working hard behind the scenes to ‘bridge the gap’ and best prepare future academy graduates.

Academy coach Charlotte Healy is overseeing the development of the club’s next generation and already works closely with the men’s side to tap into decades of experience.

“There are invaluable assets within the club that help each other combine thought processes. We know how hard Charlotte works anyway, but what we’re trying to do is make sure she can get across the first-team aspects too, so there is a seamless transition.”

Healy herself told BBC Sport in May, “We are responsible for making sure they can play at the highest level they can - whether that's our first team or others. We want them to look back on the academy in five years or so and say it had a massive benefit on their life.”

This article was originally published on 90min as Karna Solskjaer leaves Man Utd to sign first professional contract in Norway.