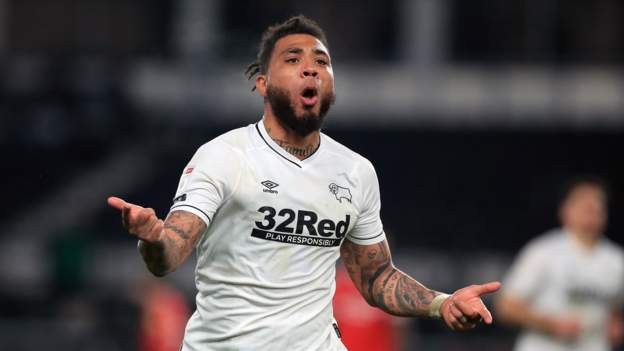 Having almost given away a penalty when Yuri Ribeiro looked to have handled a shot from Kamil Jozwiak, Forest went ahead against the run of play through James Garner's first senior goal, volleyed past David Marshall, but failed to build on that despite a string of chances.

Anthony Knockaert was at the heart of their creative play, but his header went wide and another from Garner was straight at replacement keeper Kelle Roos.

While it was still 1-0, Derby always had a chance and so it proved when, with growing pressure, Kazim-Richards brought the ball down, recovered a ricochet off Forest defender Tobias Figueiredo and volleyed past Brice Samba to give Wayne Rooney a draw in his first derby in charge.

Filip Krovinovic (Nottingham Forest) wins a free kick in the defensive half.

Lee Gregory (Derby County) wins a free kick in the defensive half.

Attempt blocked. Filip Krovinovic (Nottingham Forest) header from the centre of the box is blocked. Assisted by Lyle Taylor with a cross.

Attempt missed. Lee Gregory (Derby County) right footed shot from the centre of the box misses to the left. Assisted by Patrick Roberts with a cross.

Attempt missed. Anthony Knockaert (Nottingham Forest) header from the centre of the box is close, but misses to the left. Assisted by Yuri Ribeiro with a cross.

Attempt saved. Tobias Figueiredo (Nottingham Forest) header from the centre of the box is saved in the top left corner. Assisted by Anthony Knockaert.

Andre Wisdom (Derby County) is shown the yellow card for a bad foul.