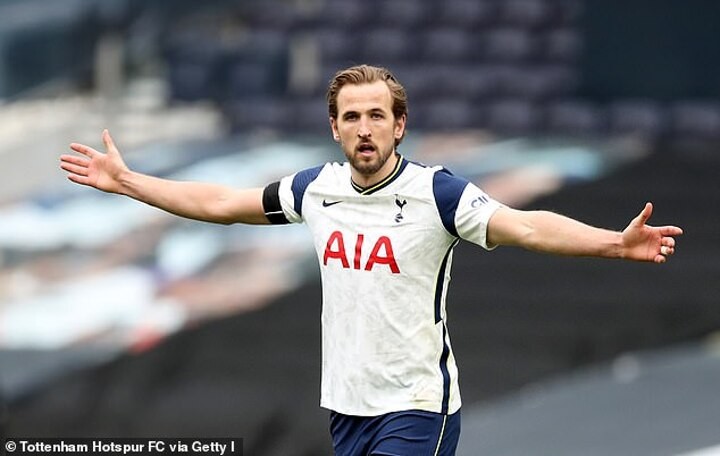 Roy Keane has claimed that Harry Kane 'fancies' a move to Manchester United in the summer, but fellow pundit Micah Richards disagreed because the England caption would not be 'guaranteed' trophies.

Kane presided over another listless Tottenham performance on Sunday when Spurs lost 3-1 at home to United, leaving them seventh in the Premier League and six points off the Champions League places.

As speculation is rife about whether Kane will seek medals elsewhere at the end of the season, Keane suggested his former club was a likely destination.

'Kane today will be looking at this United team and they’ve made progress over the last 12 months,' Keane said on Sky Sports.

'Surely Kane must be thinking: "I could be the top man at Man United up front". With the service he’d be getting, Kane must fancy a United move.

'I think Kane fancies United. I’ve just got a feeling.'

However Keane was cross-examined on his feeling by ex-Manchester City defender Micah Richards, who said Kane would move somewhere where silverware was guaranteed.

'And because Man United are still in that rebuilding stage, it might be three or four years before (a trophy comes). If I’m Kane, and the form that I’m in - 19 goals, 13 assists, ridiculous - I’d be going to the team that’s going to get the most trophies.'

Keane countered that United are closing the gap on City, and Kane in the team would be a 'huge step' to winning trophies again.

'No doubt Man City are obviously going to buy as well, of course,' he added. 'But maybe Kane doesn’t want to go abroad, maybe he likes playing in England. He knows the league inside out and Man United are still a huge, huge pull.'

But Richards was unmoved, insisting that a player of Kane's class and age would move to immediately challenge for the most coveted prizes, the Premier League and the Champions League.

'There’s a space up top for him at City,' he said.  'We’re talking four Premier League trophies in the last 10 years.