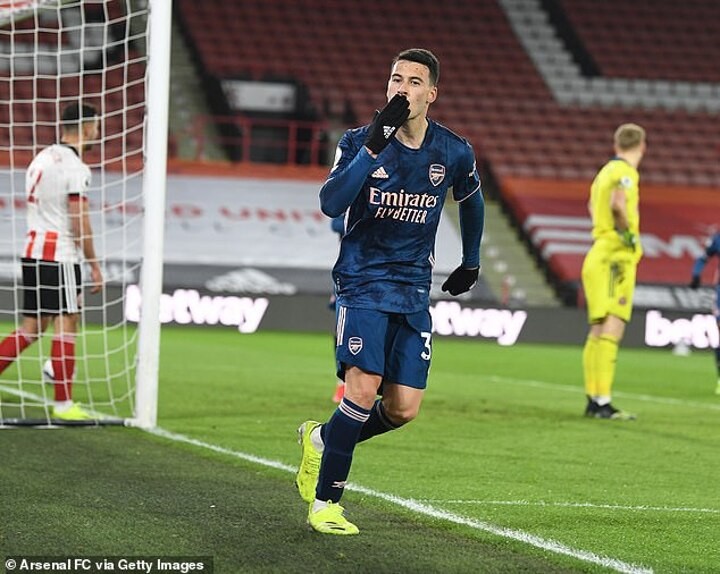 Martin Keown has lavished praise on Arsenal starlet and 'great talent' Gabriel Martinelli and insisted that boss Mikel Arteta has to keep him in the starting XI following his goal against Sheffield United.

The Brazilian scored his first Gunners goal for 15 months in Arsenal's 3-0 away victory over the Blades on Sunday, and sparkled throughout a match in which glimpses were viewed of the promise of Arteta's project.

Despite his lengthy absence, Keown believes Martinelli has already proved he is worth the £6million Arsenal paid for him in 2019, and pointed out the low price tag compared to some of the Gunners' other transfer exploits.

'There’s been a lot of talk about Arsenal’s recruitment and have they spent too much money for certain individuals, but this guy (Martinelli) - it was a snip they paid for him,' Keown said on BT Sport.

'(The goal) really will help him. He’s been through a lot, 15 months since he last scored, he’s had injuries, his ACL. But he’s an instinctive finisher, he knows where to run.'

Martinelli's transfer fee is dwarfed by some of the figures Arsenal have paid for other forwards in recent times, most notably a club record £72million for Nicolas Pepe, £57m for captain Pierre-Emerick Aubameyang and £48m for Alexandre Lacazette.

Keown has been impressed with Martinelli for a long time and said he has consistently wanted Arteta to pick him in the first team when he has been fit.

'I’ve almost felt like I’ve been signing a petition to get him (Martinelli) in the team. He’s a great talent,' Keown said.

'We have to look at it and say ok, has there been any underlying injury? Are there other reasons why he’s not been in the team? But now he’s in the team, I think he vindicates that selection and he should stay in the team.

'I don’t think you can take him out now.'

Arsenal now look ahead to their crucial Europa League quarter-final second leg against Slavia Prague on Thursday and Keown admitted there were tough calls to make on whether Martinelli should start.

'This depends on the selection,' he said. 'You’ve got (Emile) Smith Rowe to think about, Aubameyang as well to come back in. Do we put (Bukayo) Saka back to left-back? It depends who is available.'