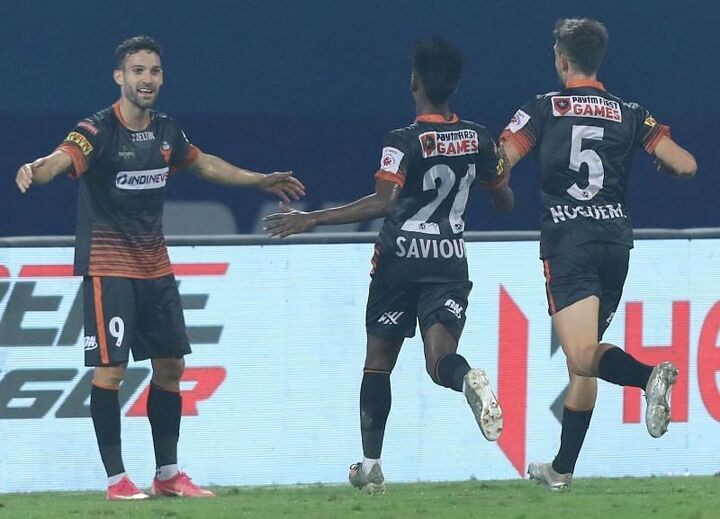 FC Goa came into the game on the back of a five-game unbeaten run. The Gaurs were aiming to stay within reach of the table toppers.

Kerala Blasters, on the other hand, came into the game having remained unbeaten in their last three games.

Kerala had been on the rise in the points table and wanted to win the game to continue their upward trajectory.

The game started on a bright note with both teams creating clear-cut openings within the first ten minutes.

FC Goa took the lead in the 25th minute when Jorge Ortiz Mendoza's free-kick beat Albino Gomes due to a deflection from Sahal Abdul Samad.

The scoreboard at half time read 1-0 in favour of the Gaurs.

Kerala Blasters started the second half on a brighter note compared to FC Goa. They eventually got the equaliser in the 57th minute when Rahul KP scored from a corner.

FC Goa then went a man down when Ivan Gonzalez was sent off but managed to hold on to a point.

Let's take a look at four things we learnt from today's game.

The former Getafe youth academy product has been FC Goa's go-to man in the midfield this season.

The Spanish midfielder has netted five goals so far in 2020-21 ISL and has been FC Goa's most influential midfield player.

Against the Tuskers, Jorge Ortiz gave the Gaurs the lead in the 25th minute when his free-kick took a deflection off Sahal to beat Albino Gomes.

Having Spanish Segunda Division experience, Jorge Ortiz fit into the FC Goa set-up quickly and has established himself as one of the first names on the team sheet.

FC Goa are missing Brandon Fernandes. But in his absence, Jorge Ortiz has been taking up even more workload to help FC Goa get the desired results.

Rahul Kannoly Praveen, the lad from Thrissur, Kerala, has been the saviour for Kerala Blasters of late.

Rahul KP is one of the most highly-rated youngsters in India. He played in the 2017 FIFA U17 World Cup and was one of the team's brightest prospects.

Kerala Blasters signed Rahul KP on a long-term deal and have successfully held on to him despite attention from multiple teams.

Rahul scored the winner for Kerala Blasters in their last game against arch-rivals Bengaluru FC in the 90th minute.

Against Goa, he scored the equaliser for Kerala in the second half to secure a point for them.

Gary Hooper was the most talked-about signing before the season kicked off.

Given his record, he was also, undoubtedly, one of the most high profile signings.

The English striker, though, hasn't been able to do justice to his name so far this season. Hooper has found the net only twice this season in eleven games and has been guilty of missing some glorious chances.

Against Goa, Gary Hooper should have scored from the opportunity he got in the second half, but he failed to do so.

If Kerala Blasters want to qualify for the playoffs, they need Gary Hooper to fire on all cylinders.

Brandon Fernandes is probably India's best attacking midfielder at the moment. He has been instrumental for FC Goa in recent times.

But the Gaurs are missing the local star due to an injury.

In his absence, the FC Goa midfield hasn't looked the same, and they seem to lack that cutting edge in midfield.

FC Goa started the game without their top goalscorer Igor Angulo. And though he did make a second-half appearance, he failed to have any impact on the game.

Even though FC Goa are unbeaten in their last five games, they have been missing Brandon and Igor's services.