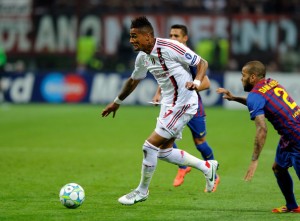 Ac Milan Ghanaian star Kevin-Prince Boateng has ruled a move to Real Madrid insisting he will end his career with the Italian giant.

The 25-year-old has strongly been linked with a move to the Bernabeau with boss Jose Mourinho reportedly interested in his services.

The former Tottenham enforcer has been a revelation since he joined the Rossoneri at the start of the season where he has scored some important goals for the club.

But the former Black Stars midfielder claims he has no plans to quit the Italian giant.

â€œMourinho is a good coach but I love Milan and will like to end my career here,â€