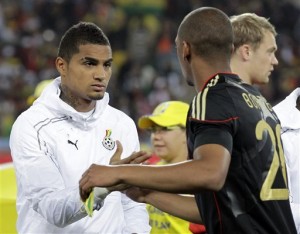 TheÂ RossoneriÂ visit Holland on August 20 with the return leg at SanÂ SiroÂ on August 28.

â€œWe are working well and the team is getting stronger every day,â€Â Boateng said.

â€œThere are still almost two weeks before we have to take it seriously, so we are perfectly within the planned schedule.

â€œEven if our results in pre-season werenâ€™t exceptional, I think the side did pretty well.

"We only had a few problems against Manchester City in the Audi Cup, when we conceded five goals in the opening half-hour, but I can assure you we will be ready for the Champions League play-off.â€

Milan finished third in Serie A last season, so must go through the preliminary round to reach the Champions League group phase.

â€œMilan will fight for the top spots this term. Our team is solid and I am convinced weâ€™ll at least finish on the podium,â€ continued the Ghanaian.

â€œMany people think we are not as competitive as in the past, but they are wrong. Alright, there are fewer marquee names, but still players of great talent like Stephan El Shaarawy, Mario Balotelli and Riccardo Montolivo, for example. You can be sure, Milan will be up there.

â€œI have changed my style of play recently. Before coming to Milan I was primarily a defensive midfielder, but in Italy I have become a trequartista. I know I still have to improve in certain respects, such as my finishing, but Iâ€™m working on it.â€