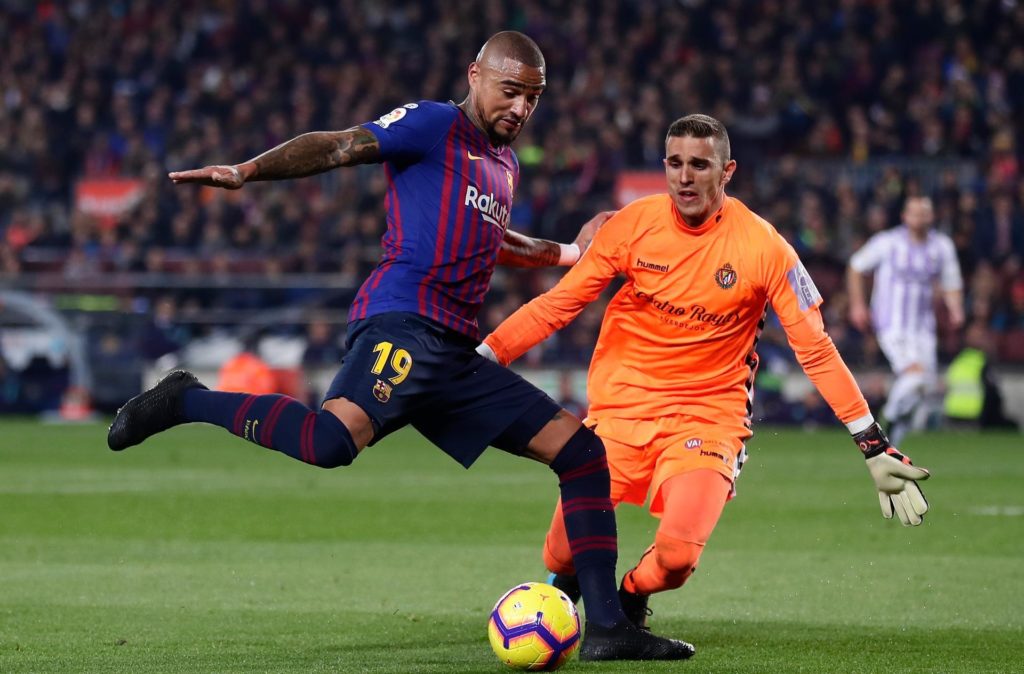 Barcelona fans looked for positives in the January arrival of the 31-year-old veteran of nine clubs in four countries on loan from Serie A’s Sassuolo, ostensibly as back-up to Luis Suarez. It was an underwhelming signing since the previous forward Barcelona had been serious about acquiring was Antoine Griezmann.

But unless he is called Paulinho, Barcelona fans are usually pre-disposed for all their new players to do well.

More optimistic voices hoped the Berlin-raised Ghanaian international might have a Henrik Larsson effect. Although age 33 when he joined, the Swede spent two productive years at Barcelona and made two assists aganst Arsenal to help the club win the 2006 Uefa Champions League, their second European Cup.

It is the chase for Barcelona’s sixth European Cup which has led to Boateng’s loan until the end of the season, with the Catalans having an option to pay €8 million (Dh33m) if they want him to stay.

A fatigued Suarez blamed too many games last season for Barcelona crashing out of the Champions League to Roma. When Suarez’s back-up, Munir El Haddadi, left for Sevilla in January, a replacement was needed.

But what could Barca do a week before the transfer window closed?

The club’s famed Masia youth system, which seldom produced top strikers at the best of times, is no longer the goldmine it once was. With the club needing to trim costs after their wages – the highest in the world and an unsustainable 70 per cent of their total turnover – there was no option of a signing of the magnitude of the previous January, Philippe Coutinho.

Picking up top players from big Premier League clubs for relatively little, as Barca did with Javier Mascherano, are long gone. Besides, big clubs do not want to let their best players leave in January.

Boateng, a cult hero and the main man in the dressing room when he last played in Spain at Las Palmas, is not an obvious choice. Nor is he a Barcelona-class player.

But he would be the man expected to fill in for Suarez, and on Saturday night he made his home league debut for the league leaders – he played in the 2-0 away Copa del Rey defeat to Sevilla – against 15th place Real Valladolid.

He started as the leading striker with Lionel Messi and Ousmane Dembele either side of him. Is there a striker in the world who can say they would prefer two other players lining up alongside them?

If there has been a criticism of Barcelona manager Ernesto Valverde, it is that he played his best team too often. That can be a blessing and a curse, but against Valladolid, and ahead of Tuesday’s Champions League game against Lyon, Suarez started on the bench together with another Valverde mainstay, Ivan Rakitic.

Up in the directors’ box, Real Valladolid’s president Ronaldo – yes, you read that right – would have been a curious observer of the state of Barca’s forwards as they struggled against the team who have scored fewer than any in the league this season, just 19 in 23 games.

He did have Barca’s first shot on target after nine minutes, a moderate effort along the ground which troubled nobody.

Boateng tried, but laboured. He came deeper to get into the game but conceded a 27th-minute free-kick after a clumsy tackle in his own half. A minute later, he strode forward with Messi to his left. The crowd waited in expectation. Boateng passed the ball to a Valladolid player.

Messi scored a 43rd-minute penalty won by Gerard Pique, and that was it as far as the goals went on a night which was not vintage Barca. Messi also had an 84th-minute penalty saved.

Though the Argentine’s penalty record remains patchy, Barca did not need to be at their best. A win, a clean sheet and no injuries was sufficient, but five minutes into the second half, Boateng had the ball in space from outside the area. He took a shot as the crowd drew breath. Barca’s first Ghanaian player shot high and wide.

Barca got the win they needed to go nine points clear of Real Madrid at the top and Suarez partly got his rest, but the fans were singing for the Uruguayan and he was introduced for Boateng after an hour.

Barca supporters in the 67,485 crowd were generous in their applause for their on-loan No 19 when he left the field. They will judge him over several games and not while he is still in his first month, but he added nothing to Barca against Valladolid.

No Barca player touched the ball fewer times, no player gave the ball away as much as Boateng. His replacement Suarez touched the ball more in 30 minutes than Boateng did in 60, though Valverde said it was always difficult for a new to player to fit in straight away with a team which has been playing together.

“A dream doesn't become reality through magic," Boateng said earlier in the week. "It takes sweat, determination and hard work.”

That attitude had served him well in a lively career during which time he made enough of an impression to attract clubs including Tottenham Hotspur, Borussia Dortmund, Milan and Barca.

Impressing for Barca will require a considerable step up, not that he is expected to make it in the biggest games, starting with Tuesday’s game in Lyon.