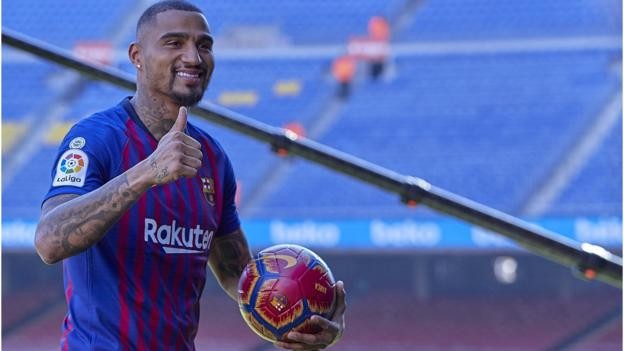 Kevin-Prince Boateng was presented to Barcelona fans on Tuesday

One of the more surprising transfers of the window saw Barcelona sign 31-year-old former Tottenham and Portsmouth player Kevin-Prince Boateng from Italian side Sassuolo.

Since 2016, the journeyman has played for AC Milan, Las Palmas and Eintracht Frankfurt, and only joined Sassuolo in the summer.

The ex-Ghana international played in midfield for most of his career, but became a striker during his previous spell in La Liga - with Las Palmas in 2016-17, when he scored 10 goals.

He has scored five goals this season for Sassuolo, who sit 12th in Italy's top flight.

His move to Barcelona is a six-month loan deal, with an upfront fee of £870,000, and the option to make it permanent for £7.1m in the summer.

Is the deal as bizarre as it seems? What is the logic behind it? Experts on a European football special of the BBC Radio 5 live Football Daily looked at the "far-fetched" signing.

'He offers something different' - why turn to Boateng?

Spanish football journalist Guillem Balague said: "Barcelona manager Ernesto Valverde wants a number nine with experience in Spain - so the list gets smaller. He wants someone who could make an impact straight away and who will understand the role.

"He admits he won't start. He comes in as a number nine who offers something different from Luis Suarez. Especially if they go through in the Copa del Rey - and Suarez has problems with his knee. He will be competitive in games - and in training. All of the sudden you have someone else biting.

"When Valverde rang Quique Setien, his former Las Palmas manager, on Friday and said 'how about this guy?' Setien said 'in the big games, he will give you more than anyone else'. That was the decisive factor."

'Shows how far down the club has come' - problems at Barcelona?

Independent chief football writer Miguel Delaney said: "It's not surprising in the context of Barca's recent moves. This follows on from Paulinho's move from the Chinese Super League last season.

"It's an amazing thing to say considering Barcelona have been maybe the most glamorous team in football for the past 15 years but they have to resort to these cut-price deals. The size of their wage bill means they've had to balance signings like Philippe Coutinho and Ousmane Dembele with players to bolster their numbers in deals like this."

French journalist Julien Laurens said: "It shows how far down this club has come. Even a club like Barcelona have to be careful with money. I'm sure they'd love to sign a £100m player for that role.

"They would have liked to get Paris St-Germain midfielder Adrien Rabiot [who is a free agent in the summer]. But they can't do it in January. But they can find someone like Boateng.

"I find it incredible. They won the Champions League with the MSN [Lionel Messi, Suarez and Neymar] up front and now they're signing Boateng."

'Not as crazy as they say' - could it prove a shrewd signing?

"It is a gift just to play alongside them," said Boateng of his new team-mates

Italian football journalist James Horncastle thinks it will be a good move.

"In the first six weeks of the season in Serie A, the best player in the league was Kevin-Prince Boateng. That will surprise a lot of people but he was playing exceptionally well.

"He's never parted on bad terms with his managers - they all respect him and think he's got a different skill-set from people in his position.

"You can turn your nose up all you like but even if it's a short-term rental, I don't think there's any risk added to it. They can only gain from it or ultimately he can go back to Sassuolo and that's fine.

"It looks far-fetched; it is a surprise. It's not as crazy as people say. I don't think anyone expects him to start every game and score 50 goals. It's a stop-gap situation.

"People at Sassuolo said he was a leader who spoke several different languages and could be a reference point for other players. People see him as bling but he's a pretty level-headed thoughtful footballer."

Balague said he is reminded of Barcelona's signing of 32-year-old Celtic striker Henrik Larsson in 2004. The Swede scored 19 goals over two seasons, and won two La Liga titles and the Champions League.

"Remember Larsson?" said Balague. "We're talking about a former AC Milan player [in Boateng], someone with experience. Why not?

"He will make an impact straight away and knows he won't be a regular. Larsson understood that was his role. So will Boateng. I think it's a left-field but clever signing."