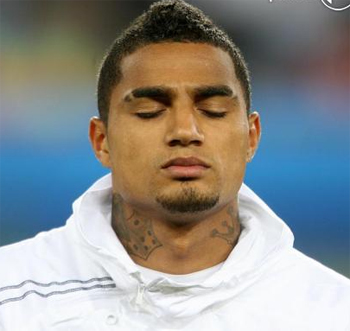 Kevin-Prince Boateng wants to return to the Black Stars

Black Stars management committee member Yaw Boateng Gyan will be meeting with the family of Kevin-Prince Boateng this weekend in urging the AC Milan star confirm his return to the Black Stars.

The 26-year-old according to Ghana FA President Kwesi Nyantakyi is desirous of a return to the Black Stars after ditching the side for over two years now.

Boateng claimed his body couldnâ€™t cope with playing for both club and country haven excelled with Ghana at the 2010 World Cup.

The AC Milan star now wants to return to the Black Stars but must make his decision official in writing to the Ghana FA.

â€œI will be meeting the father and the rest of the family this weekend to talk about this issue,â€ he told Montie FM.

â€œWe will call our son (Kevin) afterwards to urge him to write this letter as soon as possible so he can return to the Black Stars.

â€œI feel this is very important as he wrote to quit the national team and therefore another letter is needed to cancel the first one.â€

Boateng could be available for selection by the time Ghana plays Zambia in the deciding 2014 World Cup qualifier on September 6 in Kumasi.