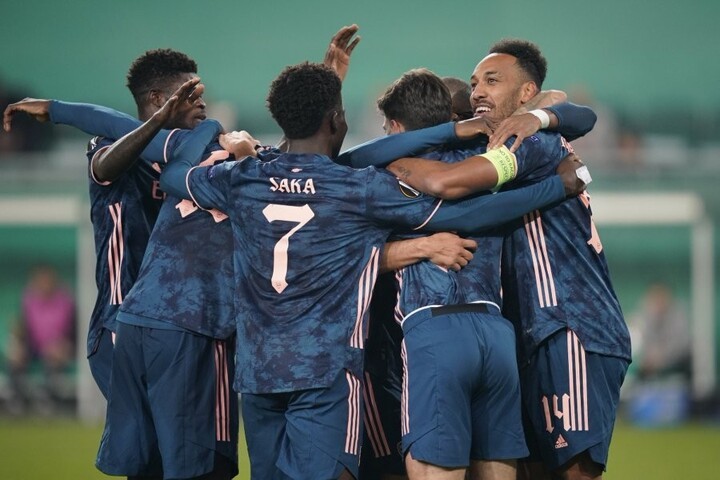 Rapid Wien 1-2 Arsenal: Aubameyang & Luiz net as Gunners fight back from behind

Arteta’s side had to come from behind to get all three points in their Europa League opener against Rapid Vienna.

Spurs off to the perfect start in the Europa League as strikes from Lucas Moura and Hueng-min Son, either side of Andrade's own goal, seal a routine victory for Jose Mourinho's side.

Celtic were overcome by AC Milan in their opening Europa League group stage game, despite a late rally in Glasgow.

Juventus star Cristiano Ronaldo will sit out his side’s Champions League clash against Barcelona next week after registering a new positive Covid-19 test.

Check out the first 2020/21 UEFA Champions League Fantasy Football Team of the Week.

There were long faces and there was tension in the Real Madrid dressing room following Real Madrid's 3-2 defeat to Shakhtar Donetsk on Wednesday night. Club president Florentino Perez saw that first hand, as he stopped by to see the players following their second defeat in a row.

Real Madrid's poor early-season form has led the club's hierarchy to consider their available options if Zinedine Zidane has to be replaced.

The Spanish football federation (RFEF) have announced their refereeing appointments for this weekend's Matchday Seven fixtures and Juan Martinez Munuera will be the man in the middle for El Clasico between Barcelona and Real Madrid at the Camp Nou. In the VAR room for the game will be Jose Maria Sanchez Martinez.

Gerard Pique's new Barcelona contract saw him accept a 50 per cent pay cut and a clause that could allow the Nou Camp club to scrap the deal altogether next season.

Jorginho has taken on an additional role in the Chelsea dressing room by helping Thiago Silva learn key footballing phrases in the English language.

Manchester United need “someone behind” Paul Pogba to get the “best” out of him, according to Troy Deeney.

Luka Jovic has found himself in trouble again. The Real Madrid forward could be facing a prison sentence for violating Serbia's coronavirus quarantine protocol.

Raheem Sterling took a blow from veteran Porto defender Pepe's knee during a feisty Champions League encounter at the Etihad on Wednesday night.

Berbatov: Man Utd transfer solution has been under Solskajer's nose

Hakim Ziyech says he is glad a proposed move away from Ajax in 2018 collapsed because it allowed him to improve before joining Chelsea two years later.

The first Clasico of the season is coming up and will take place on Saturday afternoon, with Barcelona hosting Real Madrid at the Camp Nou. It is a special fixture and several former Barcelona and Real Madrid players who have experience of it have had their say on this weekend's duel.

Asensio: I could have played for Barca, but Madrid showed incredible interest

Marco Asensio will be wearing white for Saturday's Clasico against Barcelona at the Camp Nou, but the Real Madrid forward could have ended up playing for the opposite team.

Barcelona's next generation is on its way

A lot has been said about the high average age of Barcelona's squad and the need for a generational change, but Ronald Koeman's youngsters proved against Ferencvaros that they are ready to step up to the mark.