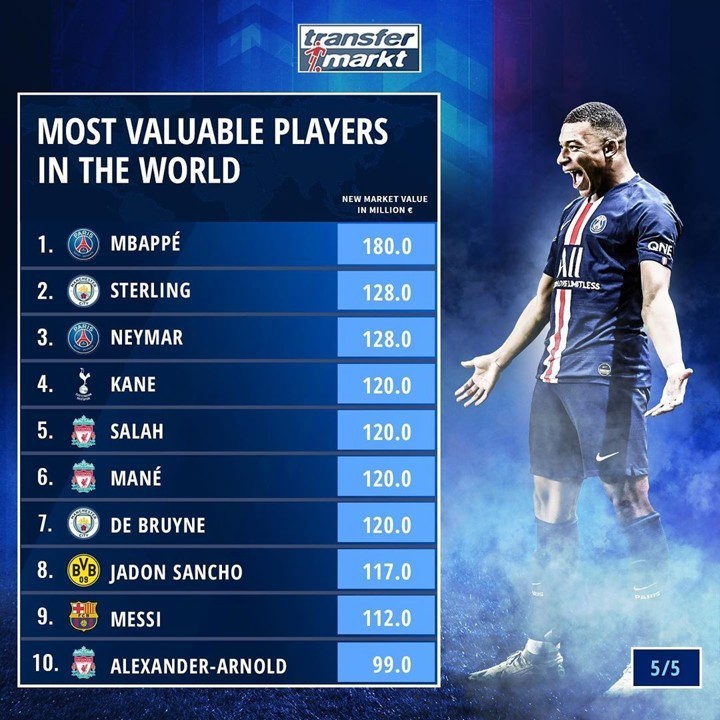 Transfermarkt has updated the latest player value with Mbappe remaining on top despite coronavirus devaluation.

Koulibaly 'would prefer PSG' to Man Utd, Liverpool or Tottenham

Premier League clubs have been given permission to hold friendlies before restarting the season from June 17.

People around the world have been joining an initiative started by the music industry under the hashtag #blackouttuesday on Tuesday.

Chelsea became the latest Premier League club to throw their support behind the Black Lives Matter movement on Tuesday.

Marcus Rashford and LeBron James posted powerful messages on 'Blackout Tuesday' as the world of sport continues to protest against the death of George Floyd.

Roman Abramovich is prepared to back Frank Lampard in the next transfer window so he can take advantage of what could be a cut-price market in the coronavirus era.

A move away from Tottenham for Harry Kane remains a “possibility”, admits Harry Redknapp, with a striker who continues to see moves to Manchester United or Real Madrid mooted expected to give Spurs one more season in which to deliver major silverware.

Braithwaite issues a warning to Suarez: Physically, nobody beats me

With Luis Suarez set to return from his extended injury layoff, emergency signing Martin Braithwaite has laid down the gauntlet to the Uruguayan, suggesting that there is nobody at Barcelona who physically beats him.

Leipzig boss: If Werner decides to leave, there is nothing we can do

Premier League and Serie A giants are on high alert after RB Leipzig coach Julian Nagelsmann confessed Timo Werner is likely to leave. ‘There is nothing we can do about it.’

‘Messi the only player who can do what Ronaldo Nazario did’

Philippe Coutinho represents no risk for Tottenham, says Darren Bent, with the Brazilian boasting the potential to be a “superstar” in north London if an £8 million ($10m) loan fee is paid to Barcelona.

Ceballos: My goal is to succeed at Real Madrid

Arsenal loanee Dani Ceballos says that although he has yet to speak to Zinedine Zidane over his Real Madrid future, he is still determined to "succeed" at Santiago Bernabeu.

German FA chiefs insist they 'completely understand' the tributes to George Floyd by Bundesliga players - but have come under fire after confirming a quartet could now face sanctions for taking a stand against racism.

Bruno Fernandes admits he must IMPROVE when football returns

Bruno Fernandes is expecting a 'difficult' return to Premier League action this month, despite taking English football by storm since his arrival in January.

Messi and Bojan are 4th cousins? Players you probably never knew were related

There are certain families for whom playing football at an exceptionally high level seems to just come naturally.

The countdown to the restart of La Liga is on.