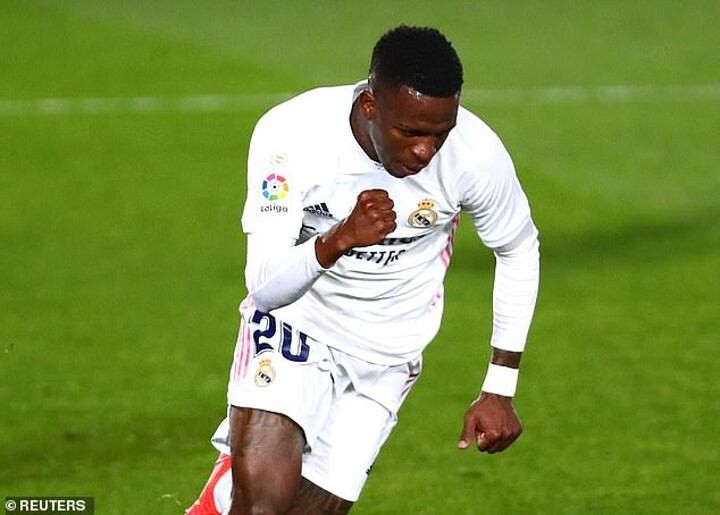 Vinicius scored a late leveller on his 100th game for Real Madrid to salvage a point against Real Sociedad.

Barca official statement: We will cooperate fully with the police & the judiciary

The Football Association will decide today whether to charge Luke Shaw after the Manchester United defender accused referee Stuart Attwell of refusing to award his team a penalty at Chelsea.

Bellerin 'has agreement to return to Barcelona if Laporta becomes president'

Hector Bellerin has an agreement in place to negotiate a deal with Barcelona if Joan Laporta is elected Catalans president, according to reports.

Barcelona presidential candidate Joan Laporta reportedly wants Mikel Arteta to take charge of the club should Ronald Koeman not stay on next season.

Aaron Wan-Bissaka will reportedly snub England and opt to represent DR Congo at international level if Gareth Southgate doesn't pick him in his upcoming squads.

Barcelona, Real Madrid and Atletico have their salary caps lowered by LaLiga

Reports have begun to emerge detailing the updated salary caps for each team in LaLiga Santander following the January transfer window.

Guardiola: Eric Garcia is going to play for Barcelona

Pep Guardiola has admitted that Eric Garcia is on his way to Barcelona in the summer.

Romelu Lukaku has admitted battling Cristiano Ronaldo for the Golden Boot is second in his thoughts to winning the Serie A title with Inter Milan.

David de Gea has vented his frustration after Manchester United's underwhelming stalemate with Chelsea on Sunday.

Zidane: The change of formation may have harmed Real Madrid

Zinedine Zidane has admitted that his tactical changes weren't as successful as he would've hoped them to be against Real Sociedad.

Anthony Martial should quit Manchester United if he continues to be played out of position by Ole Gunnar Solskjaer, says John Barnes.

THINGS WE LEARNED from the Premier League weekend

It was the Premier League weekend that saw controversy and conspiracy theories at Stamford Bridge as Manchester United felt they were denied a clear penalty against Chelsea.

The Barcagate timeline: What is the scandal that led to Bartomeu's arrest?

Josep Maria Bartomeu and other former Barcelona directors have been arrested this Monday morning over the Barcagate scandal.

How Bartomeu destroy a football club in five years

June 5, 2015 was a huge day for Barcelona as they won the Champions League under Luis Enrique to complete a stunning treble including the LaLiga Santander title and the Copa del Rey.