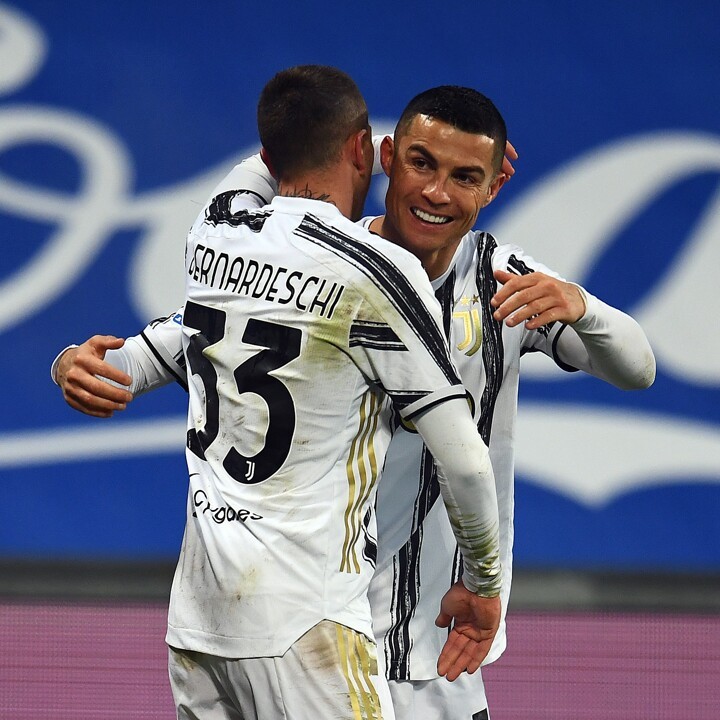 Cristiano Ronaldo and Alvaro Morata got La Vecchia Signora's two goals, with the Spaniard killing the game off with the final kick of the game, putting the finishing touches on a swift counterattack and the night itself.

United have made a habit of conceding first but going on to win on their travels this season, and it happened again as goals from Edinson Cavani and Paul Pogba secured all three points after Ademola Lookman's early opener.

Alcoyano 2-1 Madrid: Los Blancos knocked out of the Copa del Rey in extra-time

Game is over and the final score is CD Alcoyano 1-1 Real Madrid. Here is the match report.

OFFICIAL: Ronaldo, Messi & Lewy lead UEFA Team of the Year 2020 as Neymar in

Lionel Messi and Cristiano Ronaldo have both been selected, but the all-out attack line-up means the two superstars are in positions they wouldn't normally find themselves. The Juventus man has been picked for the 15th time and has now been in every Fans' Team of the Year since 2007. Messi has been chosen for the 12th time.

Cristiano Ronaldo has made in history after becoming the all-time top goalscorer in football after scoring for Juventus in their clash against Napoli.

Liverpool and Manchester City want to sign Adama Traore but Leeds United consider the Wolves winger out of their price range, according to reports.

Fernando Torres looks like he could be ready to ditch his 'El Nino' nickname and adopt the new moniker of 'El Hombre' after showing off his incredible body transformation on Instagram.

Calls to sanction referee who sent off Messi

Mediapro founding partner Jaume Roures has claimed that the referee of the Supercopa de Espana final Gil Manzano should be sanctioned for failing to punish Athletic Club players for their challenges prior to Lionel Messi's sending off.

Juan Mata's time at Man Utd appears to be drawing to a natural close.

Messi was once close to joining Espanyol on loan, reveals Pochettino

Mauricio Pochettino has revealed he once came close to working with a teenage Lionel Messi when he was in charge of Espanyol.

Cristiano Ronaldo has made history once again by becoming football's all-time leading goalscorer with the 760th strike of his illustrious career against Napoli.

Liverpool have gradually assembled a squad which is the envy of clubs around the world - but things could have been different.

Real Madrid midfielder Toni Kroos has apologised to Julen Lopetegui and said his former manager's sacking after four months has 'left a bitter taste' in his mouth.

Arsenal have agreed to terminate the contract of defender Sokratis

Arsenal have agreed to terminate the contract of defender Sokratis Papastathopoulos.

Koeman: If you ask me if I have interest in Neymar or Mbappe, I would say yes

Barcelona boss Ronald Koeman has responded to quotes from Paris Saint-Germain sporting director Leonardo, where he stated that the French club would be interested in Lionel Messi if he is available when his contract expires in June.

Some normality has returned to the relationship between Cristiano Ronaldo and Real Madrid president Florentino Perez after the pair met in Turin on Tuesday for the first time since last year.

Cristiano Ronaldo vs Real Madrid: A match they both lost

The official version is that it couldn't be delayed any longer, that the relationship between Real Madrid and Cristiano Ronaldo had run its natural course, that a divorce was inevitable and for the best after the strain of time.