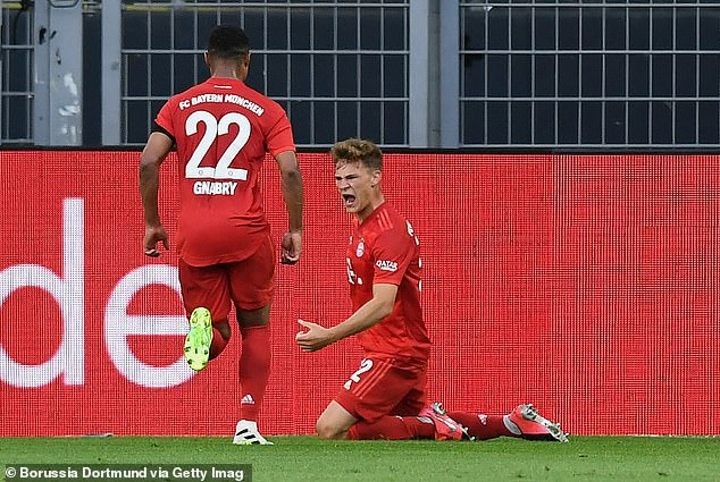 The scenes have become as much a tradition as the presentation of a trophy. In the final home game of the season, Bayern Munich's players will gather in front of their supporters and douse each other with huge vats of beer.

It is a riotous celebration, colourful and noisy with pictures over the past decade going viral. Nobody has been spared a soaking during the bierdusche (beer shower), not even Pep Guardiola, whose first year in Munich (2014) concluded with Jerome Boateng drenching him. Now, however, the pageant must stop.

'This year we have to drink all the beer!' Joshua Kimmich laughs, in an attempt to find a solution.

Kimmich, the outstanding midfielder who has become a new emblem of the club, can find some humour but the point of this conversation is serious. The resumption of football has been much welcomed yet the landscape is like nothing anyone will recognise.

Bayern, who are careering towards their eighth consecutive Bundesliga, will have to celebrate alone. It will be an alien scene – one with which Liverpool will become familiar in the Premier League – and at odds with everything that professional football should be.

'I cannot imagine it now,' Kimmich says, during the course of a 40-minute Zoom conversation. 'I just know that it is strange that if you win a game in Allianz Arena and afterwards you are not at the south stands and celebrate with your fans.

'It is strange. If we win the cup, hopefully and the Bundesliga hopefully it will also be really strange. But this title, this trophy they all count anyway. Of course it is better to win it with the fans, but we don't have the choice now.'

This is how football looks during the course of a pandemic and while Kimmich is delighted to be playing again, the Germany international has provided a fascinating insight into what English football can expect when the Premier League resumes on June 17.

Without the relentless vocal backing and the adrenaline it provides, empty stadiums are requiring footballers to concentrate even more. He might have been jesting about the beer but it is evidently a reason for sorrow that success and failure cannot be shared for the foreseeable future.

'Nearly everything changed,' says Kimmich. 'So we are in the hotel with the face masks, also on the bus when we drive to the game. When we sit together in the hotel and restaurants, everyone sits alone there. It's really different for us and also in the locker room.

'We have two-metre distance and, of course, it's really different without the fans. There is less emotions, less atmosphere. There are positive ways you can communicate with each other, you can speak with each other. The focus is more on the game as there are less discussions with the referee.

'Maybe the focus is more on the game. It's not like a show. Also there is no more (play-acting) from the players any more – lying on the ground and screaming. It's more focused on the game. But, of course, football needs the fans because of the emotion and the atmosphere.'

Kimmich, of course, scored a glorious goal against Borussia Dortmund last week – a delightful chip that left goalkeeper Roman Burki flapping at fresh air and carried Bayern clear in the title race – but it is noticeable that he does not get overexcited when describing it. There is a valid reason.

'It was really different for us, especially against Dortmund, where there is always a great atmosphere,' Kimmich explains. 'I think it's more a disadvantage for the home team than for us, but we scored there, the 1-0, there is nobody who celebrates with you from the stands.

'It was very important for us to win there but sometimes there is a lot missing. Normally you have more adrenaline; more tension inside your body when you walk in and see the 80,000 fans, screaming after every corner or chance. It's more emotional when there are fans.'

The only consolation is the fact that environment is safe and the last fortnight has passed without any complications. The Bundesliga should play out smoothly to a conclusion and for that at least, Kimmich – a 25-year-old with 48 caps for his country – is thankful.

'We are tested every three or four days and every day before the games,' says Kimmich. 'For us it is really safe. Here in Germany we are the role model for other countries because we are the only place where it is possible to play football.'