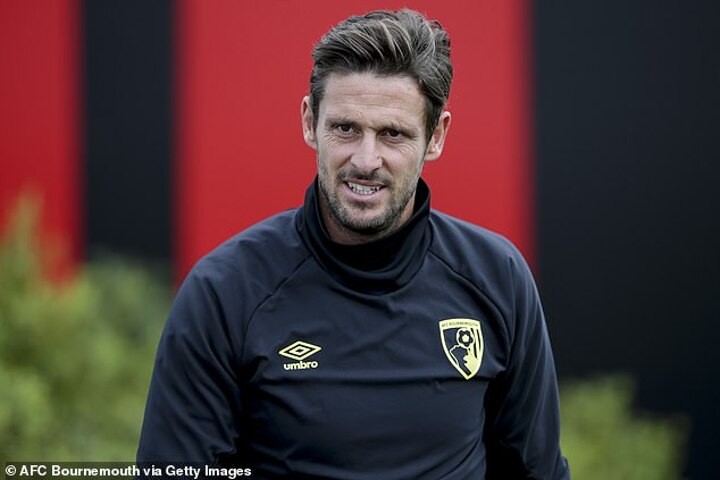 Bournemouth boss Jason Tindall is hoping striker Josh King will return with 'fire in his belly' rather than sulking after a dream move to Manchester United failed to materialise.

The Norway international, who has made just one appearance for the relegated Cherries to date this season, was linked with a series of big-name suitors during the summer after United had tried to sign him in January, but remains on the south coast.

With the summer transfer window now closed, Tindall has urged King to concentrate on proving his worth all over again ahead of Wednesday night's trip to Cardiff.

The manager told the club's official website: 'Once the window shuts, I think you can either be disappointed, sulk and handle it in that way, or you can come back with motivation, fire in your belly to go and do well and prove to everyone what a good footballer you are.

'That's certainly where Josh is. We had a good chat yesterday, he knows he's here and is itching to show everyone what a good player he is and to score goals in the Championship.'

Unbeaten Bournemouth go into the midweek round of fixtures sitting third in the table and two points behind early pacesetters Bristol City and Reading - who host Middlesbrough and Wycombe Wanderers respectively on Tuesday - but knowing Cardiff will be a threat after last season's play-off disappointment.

The Bluebirds won 1-0 at Preston on Sunday, but are still looking for a first home victory of the campaign.

Watford, who came down from the Premier League with the Cherries at the end of last season, are just a point worse off after 1-0 wins over Luton and Derby either side of defeat at Reading by the same score.

The Hornets host a Blackburn side who will be desperate to make amends for Saturday's 1-0 home defeat by Nottingham Forest.

Mark Warburton's QPR welcome Preston to the Kiyan Prince Foundation Stadium hoping to turn a run of three successive draws into a first victory since they beat Forest 2-0 on September 12, and Lilywhites boss Alex Neil is expecting a difficult evening in West London.

Neil told the club's official website: 'QPR is always a difficult game, Mark's got them set up really well. I think they've got good patterns, they know exactly how they're going to play and we need to perform well on the day to beat them.'

Brentford will attempt to put an indifferent start to the season behind them when they visit bottom-of-the-table Sheffield Wednesday, for whom a win would reduce the 12-point deduction they incurred for breaking spending rules to just one.

Stoke will seek to extend a five-game unbeaten run in all competitions against lowly Barnsley, who banked just their second point of the season courtesy of a 2-2 draw with Bristol City on Saturday.