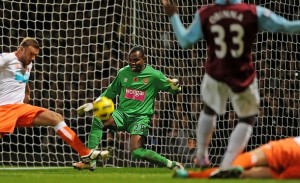 Ghana goalkeeper Richard Kingson was impressive in his second English Premier League start for Blackpool when they clashed with West Ham on Saturday.

The action-starved player was influential with his fantastic acrobatic saves that helped them to hold the home side to a goalless draw.

The Ghanaian shot-stopper was a second half substitute after taking over from injured Matt Gilks soon after the break.

Kingson pulled off another remarkable save on 79 minutes to palm away Nobleâ€™s curler.

He made an acrobatic one-handed save to tip Noble's curling 20-yard effort behind.

His performance has sparked hopes that if Gilks fails to extend his expiring contract, Kingson could become Blackpoolâ€™s first choice.

This comes after he impressed in his debut game on Wednesday even though they lost 3-2 against Aston Villa.

It was his second Premier League start since joining the club on a free transfer before the transfer window shut in August.