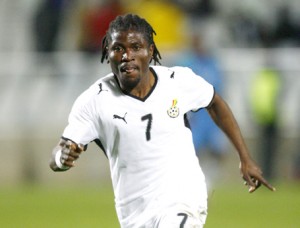 Midfielder Laryea Kingston is in on the verge of signing for Cypriot clubÂ Magusa TÃ¼rk GÃ¼cÃ¼, GHANAsoccernet.com can exclusively reveal.

The 31-year-old had successfully undergone trials at the club early January but board room wranglings have delayed his signing.

The club's directors appear divided on whether to take a chance on the former Lokomotiv Moscow player who will not come cheap.

However there seems to be a positive development in that regard and the club are now ready to sign him but are yet to specify for how long and the money involved.

Kingston was linked to a return to his boyhood club Hearts of Oak in an attempt to resurrect what seems a dead career after parting ways with Israeli clubÂ Hapoel Be'er ShevaÂ late last year.

If signed, Kingston will joinÂ compatriotÂ Anthony Obodai who joined the Birinci Lig outfit for an undisclosed fee.