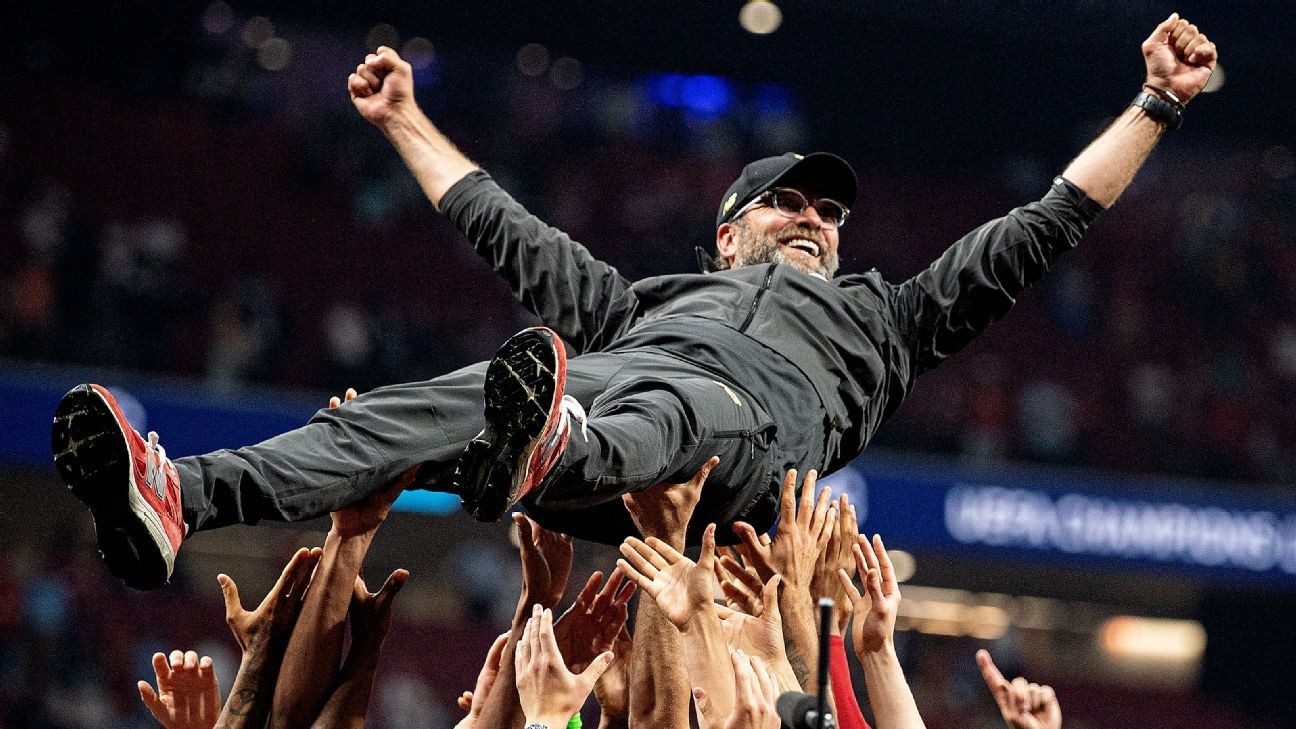 Jurgen Klopp called winning the Premier League title with Liverpool an "unbelievable" achievement after the club lifted their first league title in 30 years on Thursday.

Manchester City's 2-1 loss at Chelsea secured the long-awaited crown for Klopp's men and the former Borussia Dortmund manager said the feeling was something he couldn't describe.

"I have no words. It's unbelievable," he told Sky Sports in an interview after the match. "It's much more than I ever thought, to become champions with this outstanding club is unbelievable."

Liverpool lead City by 23 points in the table and are the fastest team to clinch the Premier League, having done so after 31 matches.

"It's an incredible achievement for my players," an emotional Klopp said.

Thousands of Liverpool fans celebrated their Premier League title win outside the club's Anfield Stadium on Thursday and Klopp said the feeling of being a champion with the Reds was indescribable.

"It's the best thing I could ever imagine and it's more than i ever dreamed of," he said.

Liverpool defender Virgil van Dijk, who watched the Chelsea win that secured the title with teammates at a Merseyside hotel, said the club had taken the Premier League to a different level this season.

"It's incredible to be part of this group of players," Van Dijk, a key component in Liverpool's incredible 12 months of success, said.

"Last season we won the Champions League and this year, especially in the Premier League, we have taken it to a different level. We have been so consistent and doing so well.

"It's a fantastic feeling. From the moment I've joined it's one team, everyone is part of it, from the people that work at Melwood [training ground], in the stadium and the players of course.

"We all want the same thing. Outside the pitch we have a bond which is outstanding as well."

Liverpool have won 28 of their 31 Premier League games and could break City's record of 100 points, set two seasons ago when they finished 25 points ahead of Liverpool.

Captain Jordan Henderson said Klopp, who replaced Brendan Rodgers in 2015, the season after Liverpool narrowly missed out on the title, had enabled the club to end its 30-year wait for a 19th league title.

"From day one he [Klopp] came in the door and just changed everything and everybody followed him and so far it has been pretty special and it has been an amazing journey," Henderson said.

"What you see is what you get, with his press conferences and on the sidelines. Obviously he as got more of a personal side with the players, but he has got a balance of having a relationship with the players and being a friend but also being a bit ruthless when he needs to be.

"He is a great leader and a great human being and we all believe in him."

Information from Reuters was used in this story.