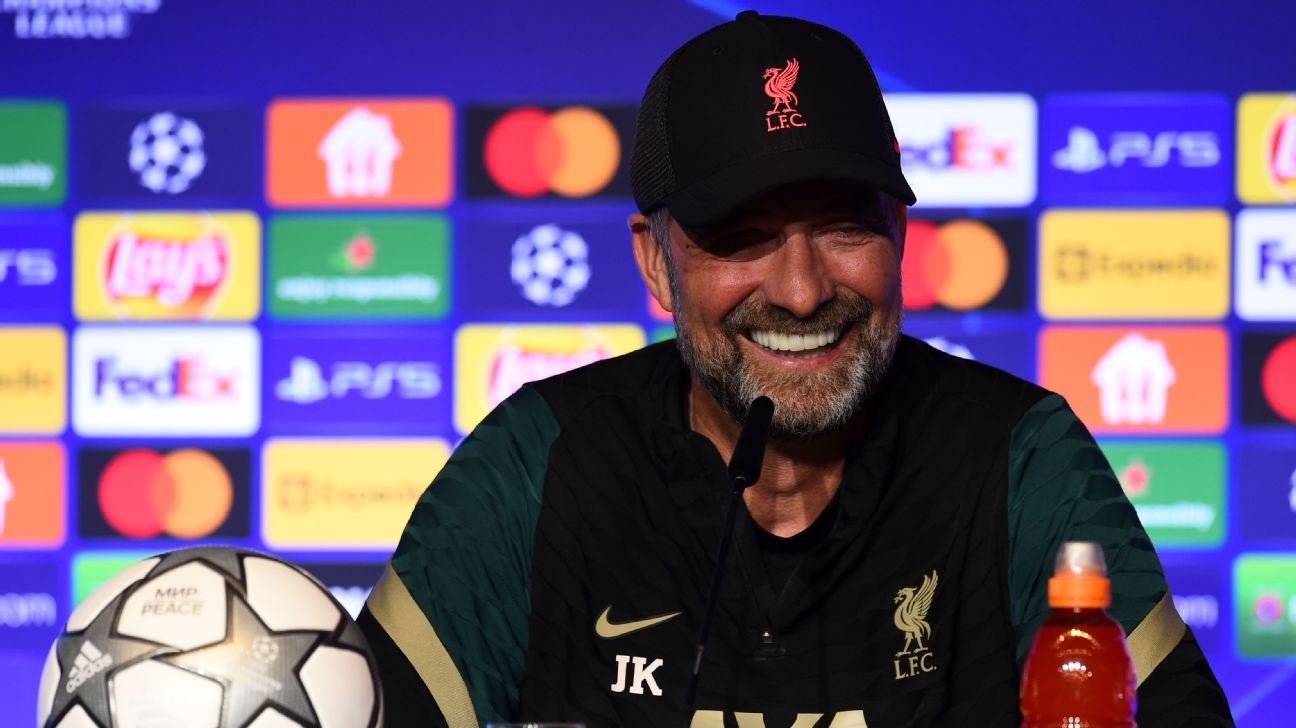 Liverpool boss Jurgen Klopp has downplayed talk of wanting revenge against Real Madrid in Saturday's Champions League final, and said that midfielders Fabinho and Thiago Alcantara have given the club a major fitness boost by returning to training.

Mohamed Salah said earlier this month he wanted to play Madrid in Saturday's final rather than Manchester City in order to take "revenge" for the 2018 final, which saw Madrid run out 3-1 winners while the Salah was injured in a controversial coming together with Sergio Ramos.

When asked at a news conference on Friday about whether Salah's comments could have an adverse impact on his performance, Klopp said: "We don't have to worry about it taking over too much -- it's completely normal. We all lost that day but he did get injured very early in the game -- he's in very good shape but he was then in good shape too.

"The only issue is if that is the only motivation but that is not the case in most cases -- it's normal that Mo wants to put things right. We didn't forget what happened that time but it's a while ago and we have so many reasons that we should give our absolute everything tomorrow night. That might be one reason but it's not the only one."

Madrid will be chasing their 14th European Cup on Saturday, while Liverpool, who last won the trophy in 2019, play in their third Champions League final in five years.

"I have no idea how it will feel if we win it. You have to ask me that question after the game. At the moment we are more in the mood to prepare so that we can give them a real game, a proper fight," Klopp said.

"[Madrid are] the most-decorated club. It's the team where some players can win it a fifth time. It's a team where the manager can win it the fourth time. It all says a lot obviously so we cannot buy this experience now or get it overnight.

"The only thing I can say, we feel experienced as well. We are [in the Champions League final] for the third time in five years. That's special as well. The only thing we think about is how to prepare for the game, how to play the game. I didn't think for a second about how it would feel because I am patient enough to wait for that moment and tell you then."

Klopp was facing a potential selection headache as Fabinho missed Liverpool's final two Premier League matches with a thigh problem, while Thiago limped off from the side's 3-1 win at Wolves last weekend with a hamstring injury.

However, the pair have trained this week and are in line to feature on Saturday.

"It looks good for both," Klopp said. "Fabinho trained completely normal. Thiago trained [on Thursday] with the team. Will train today and then we go from there."

Jurgen Klopp said on Friday that Liverpool's experience in Champions League finals will serve the side well against Real Madrid. Photo by Andrew Powell/Liverpool FC via Getty Images

Andy Robertson echoed Klopp's comments that Liverpool are more experienced that the 2018 side that suffered defeat in Kyiv.

"We wrote that wrong for ourselves in Madrid the following season," Robertson said. "That was us getting revenge on the competition as such and becoming winners for the first time. It's long in the past."

Liverpool had been hoping they could have completed a historic Quadruple on Saturday, having already lifted the Carabao Cup and FA Cup this season, but there were denied the Premier League title on the final day of the campaign to City.

Trent Alexander-Arnold said the side have moved on from last weekend's league title disappointment and are focused on wining their third trophy of the season.

"I think we've put Sunday behind us," Alexander-Arnold said. "We have the experience this season to focus on what's next.

"We've gone all the way in all comps, so we forget about others comps and focus on one we're in next. [It was] hard to take at the time but it's behind us."