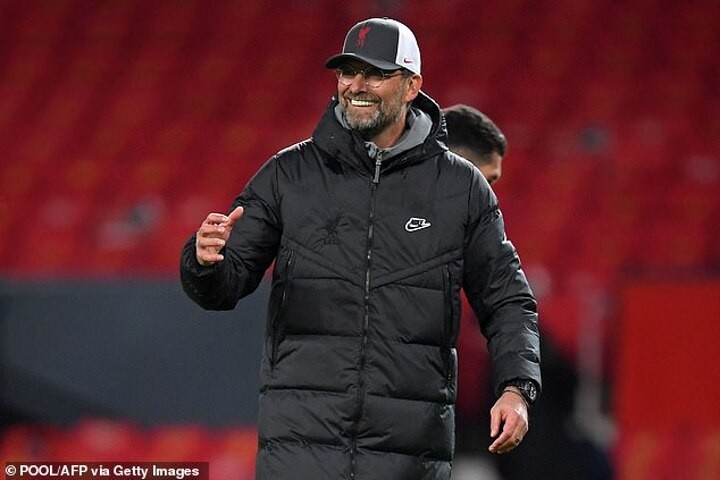 Jurgen Klopp has once again looked to move on from his frosty moment with Sadio Mane after Liverpool's crucial win against Manchester United, insisting that 'everything will be fine' between them.

Mane, who was named on the bench for the game, refused to shake Klopp's hand at full-time at Old Trafford and was caught on the television cameras walking towards tunnel whilst shaking his head.

Boss Klopp waved away the surprise snub in his post-match press duties and now, ahead of Liverpool's next game against West Brom, has doubled down on the irrelevance of the incident.

'I cannot make a bigger story of it,' Klopp told reporters at his press conference.

'Football is an emotional game and people expect that we control our emotions always but it doesn't work out that way. We will talk about it and everything will be fine.'

It is customary for Klopp to shake hands or bump fists with every player after matches and his treatment was no different in the minutes that followed a crucial three points which keeps Liverpool in the top four hunt.

Klopp revealed afterwards that the reaction from Mane may have been down to a late decision to start Diogo Jota ahead of the forward.

When it was put to him that similar treatment in other professions may well result in disciplinary action, Klopp was quick to highlight the glowing respect Mane has demonstrated for much of his Anfield career.

'If somebody shows me five million times respect and one time not, what is more important?' Klopp responded. 'I hope for you that your boss, if you one time don't show him respect, doesn't forget the other stuff.'

He went on to add: 'I can already see the headlines, but it is not about that. I am completely relaxed.

'I am a completely normal guy. We will talk about it, and then everything will be fine.'