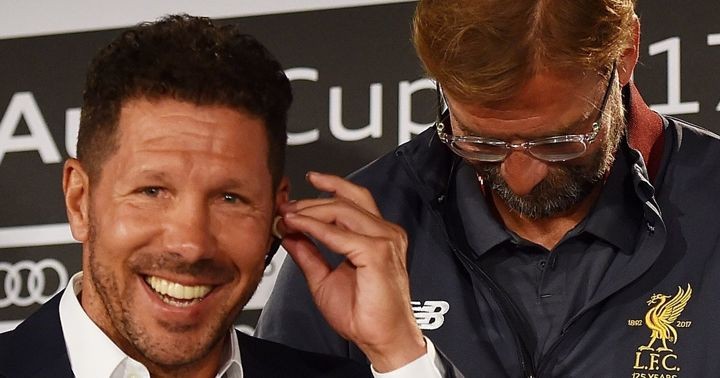 Jurgen Klopp is relishing locking horns with Diego Simeone once more as he pinpointed the Atletico Madrid danger for Liverpool.

The Reds resume their defence of the Champions League when they visit the Wanda Metropolitano for the first leg of their round of 16 tie on Tuesday.

While the first time Klopp will have faced Simeone in a competitive match, the pair were pitched in opposition in the Audi Cup final in 2017 which Liverpool lost to Atletico on penalties after a 1-1 draw.

The Spaniards have had a difficult La Liga campaign, and are currently in fourth place having won only one of their last five games.

However, Simeone's side have lost only four of their 24 league matches with Klopp mindful of Atletico's ability to frustrate opponents in low-scoring encounters.

“I am long enough in football and know it's possible, but Atletico is one of the teams were it is especially difficult,” said the Reds boss of gaining a result in the Spanish capital.

“Their goal difference is they have scored only 25 which is not too many, but have conceded only 17, which is low.

“They have had massive injury problems in recent weeks, a lot of strikers missing.

"But (Alvaro) Morata was on the bench (recently), I've heard (Diego) Costa is back in training and Joao Felix is available I'm pretty sure.

“If somebody can play for a result, it's Atletico. Mr Simeone, who I respect a lot, he tries everything.

“We have a similar story a little bit. We tried a lot and didn't win, but we still tried. I like that.

“He is so competitive – wow! Actually, we have a good relationship but I'm pretty sure he will forget that on the touchline because he is so animated.”

Felix, the 20-year-old who signed from Benfica for £113million last summer, is expected to have overcome the injury that has ruled him out of Atletico's last three games.

And Klopp will look for a little inside knowledge as Liverpool look to quell the impressive playmaker.

“I have the same opinion as 99% of people in the football world,” he added. “He is outstanding, what a talent he is.

“He combines pretty much everything. Some of our coaches, Pep (Lijnders) and Vitor (Matos), I think they worked with him when he was a kid (at Porto). I will ask them.

“But he is a special, special talent.

“That early in his career, he is able to combine his technical skills with speed and awareness in small spaces. I never could do it, so it must be really difficult!

“He is a football intelligent guy on top of that with his movements. The package is really, really interesting.”