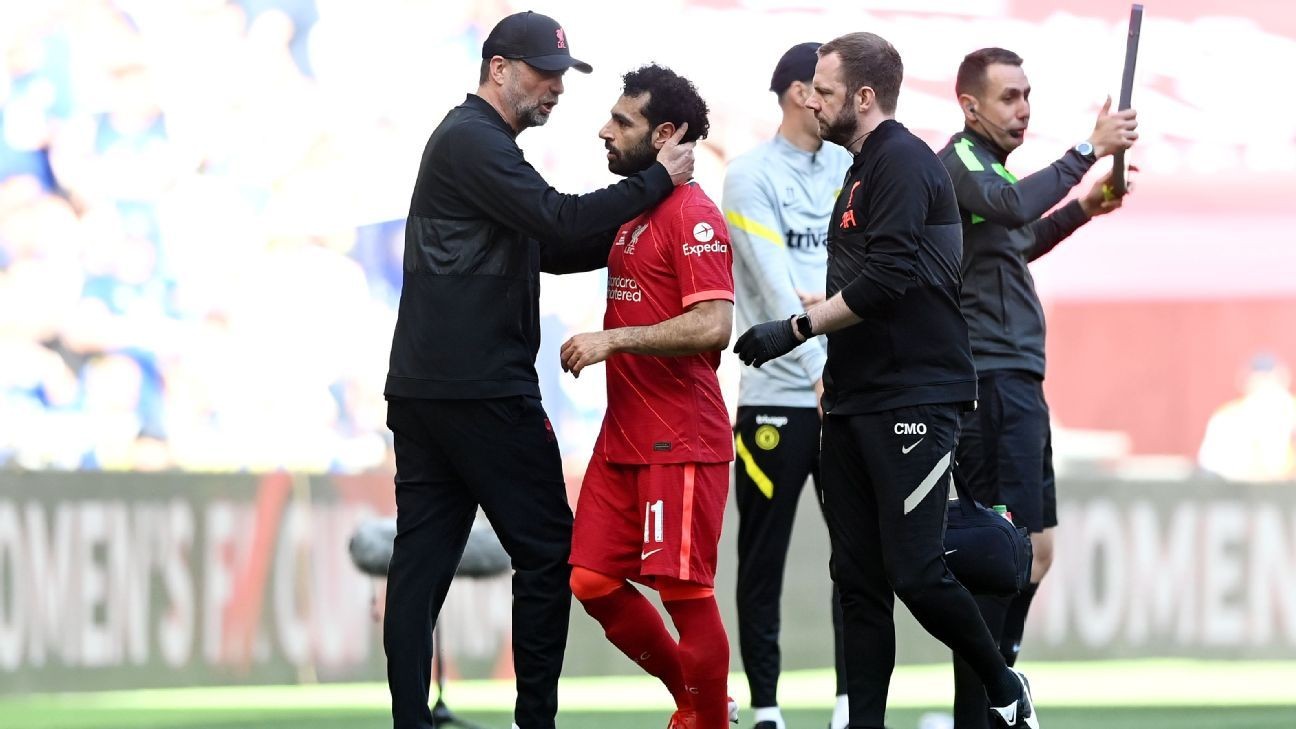 Jurgen Klopp has eased concerns over the fitness of Mohamed Salah and Virgil van Dijk for Liverpool's Champions League final clash against Real Madrid on May 28 by saying the two players are 'kind of OK' after being substituted during the FA Cup Final penalty shoot-out win against Chelsea.

Salah, Liverpool's 30-goal leading scorer this season, limped out of the Cup Final after just 33 minutes with a groin strain, while centre-half Van Dijk failed to appear for extra-time due to a muscle problem.

- Ogden: Can Liverpool shake off fatigue to win two more trophies this season?
- Don't have ESPN? Get instant access

Both players walked onto the pitch at the end of the game as the rest of Klopp's players ran to celebrate after Kostas Tsimikas scored the decisive spot-kick in the 6-5 shoot-out victory.

But although Klopp said that Salah and Van Dijk are unlikely play in Tuesday's Premier League game against Southampton at St Mary's, the Liverpool manager was more optimistic about the full extent of their injuries.

Liverpool manager Jurgen Klopp embraces Mohamed Salah as he leaves the pitch after suffering an injury during the FA Cup Final. Getty Images

"But I think they are alright, it was more of a precaution. Mo felt something, said I could carry on and I had to make a decision, I said no... if you're feeling something on the pitch, it's not going to get better [if you keep playing], staying on is not the best treatment!

"But what a situation, you bring on Joel Matip! Oh my god! That's really cool. So, all fine."

Liverpool have now won two trophies this season -- Carabao Cup and FA Cup -- and are still chasing glory in the Premier League and Champions League.

And captain Jordan Henderson said that Liverpool are now solely focused on winning their remaining games of the campaign.

"We've won two so far this season," Henderson said. "We've still got some big games left. We just need to keep on going right until the end and see what we can finish on.

"We've got to recover quickly, another big game on Tuesday against Southampton, we have to be ready for that. And then Wolves at the weekend to finish the Premier League season off and then the Champions League final.

"We have three big games left and hopefully we can win all three and finish the season on a high."