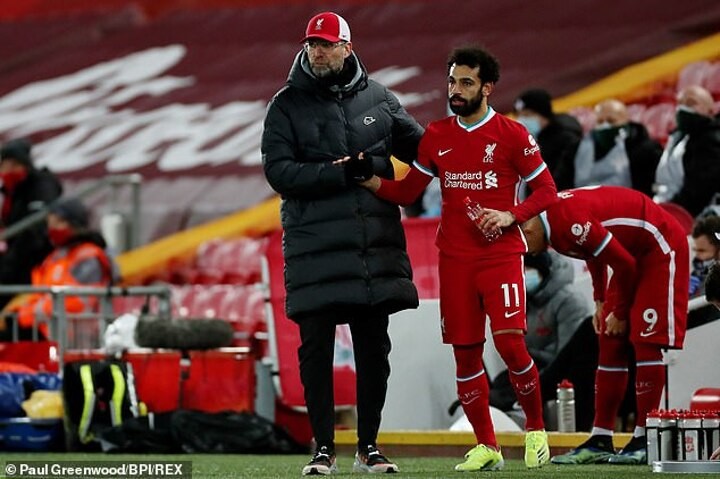 Jurgen Klopp claims speculation over Mohamed Salah's future at Liverpool will not disrupt the Premier League champions' season ahead of a difficult fixture list.

Egyptian star Salah caused a stir in December by revealing he would be open to a move to either Real Madrid or Barcelona but insisted his fate is still in the hands of Liverpool.

With Liverpool struggling for league form after a five-game winless, including four games without a goal, Reds boss Klopp insists talk of a potential Salah exit is not a distraction.

When asked whether Liverpool could be affected by the speculation surrounding Salah, Klopp said: 'I don't think so. That's a normal thing as well in the world of football.

'It's not that we go out and talk about things we think are important, it's pretty rare. But we get asked questions and we answer and that's the story and (it looks like) we started the conversation.

'In most cases, it's not like that. No, I don't think it will disrupt the season.'

After a strong start to the season, Liverpool's form has dramatically dropped off and the free-scoring Reds currently lie in fourth - six points behind leaders Manchester United.

To make matters involving their recent form even worse, Klopp's Reds face a trciky fixture list over January and February, as last season's champions face five out of the top current top-eight in their next seven league outings.

Liverpool's next game sees them face Manchester United in the FA Cup fourth round on Sunday night, with the FA Cup one of the trophies that has eluded Salah since he arrived at Anfield in 2017.

Salah admits he is focused on retaining the Premier League this season as well as aiming for another Champions League triumph, but hinted that a move to one of Spain's big boys may be too good to turn down.

'I think Madrid and Barcelona are two top clubs,' he said last month. 'Who knows what will happen in the future, but right now I am focused on winning the Premier League and the Champions League with Liverpool again.'

When pressed on his future further, Salah insisted everything was in Liverpool's hands, adding: 'That's a tough question, but right now I can say that everything is in the hands of the club.

'Of course I want to break records here and, I repeat, all the club records, but everything is in the hands of the club.'

Salah reiterated the same message in a revealing interview with Norwegian channel TV2 earlier this month.

'If you ask me, I say I want to stay as long as I can, but as I've said before, it's in the club's hands,' he said. 'I'm always going to give 100 per cent until the last minute I'm at this club and I want to win as many trophies as I can.

'I want to give 100 per cent to the people who show me love all the time.'