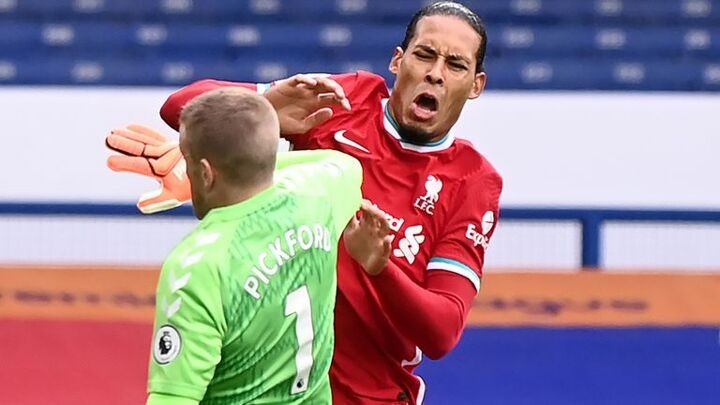 Van Dijk has missed the majority of the season after sustaining the injury in a challenge with Everton goalkeeper Jordan Pickford during the Merseyside derby on October 17.

Klopp has confirmed the 29-year-old is progressing well in his recovery but says it is too early to predict a potential return date for the Netherlands international.

"I don't know what is possible and what is not possible, I don't know if I'm the right person to judge that 100 per cent, but he looks really good," said the Liverpool manager.

"I spoke with him this morning on the phone and he is in a really good mood, so it's all very promising. But I don't know when he will be back.

"There are a lot of stages still to go over and to pass - that is clear. I had this injury myself.

"But for the time we are in, for how long he is out now and how long the rehabilitation has been going on, he looks really, really promising."

Liverpool have struggled for consistency without Van Dijk in central defence and have dropped to fourth in the Premier League following Sunday's goalless draw with Manchester United.

Klopp was forced to play midfielders Jordan Henderson and Fabinho in central defence against Ole Gunnar Solskjaer's side but the Liverpool manager is hopeful of having Joel Matip back from injury for Thursday's match against Burnley, live on Sky Sports.

Matip has missed Liverpool's last four matches with an adductor injury but is now back in full training ahead of the match at Anfield.

However, Klopp admits it will be a number of weeks before Diogo Jota will be available for selection, as he continues his recovery from a knee injury.

"Diogo is still a few weeks away, I don't know exactly how long but it will not be in the next one or two weeks," added Klopp.

"That is why we have to deal with the situation, that is what we've done and we'll all be happy when, hopefully in the near future, he will be back again."

Jurgen Klopp has played down Liverpool's current form, believing only small margins are separating his side from a return to winning ways.

Four matches without a win, the last three without scoring, has led to scrutiny not previously experienced by the defending champions.

A lack of goals is being held up as the prime reason for their recent failure but Klopp is refusing to panic, instead looking at the bigger picture.

"We all know it is all about results but sometimes you can see little steps in the right direction or not," he said.

"But it is nothing for you [the media] because you can't deal with small details. You make them big things. You are not ready for this information.

"We wanted to play better but there were a lot of good signs and I cannot ignore them and I will not.