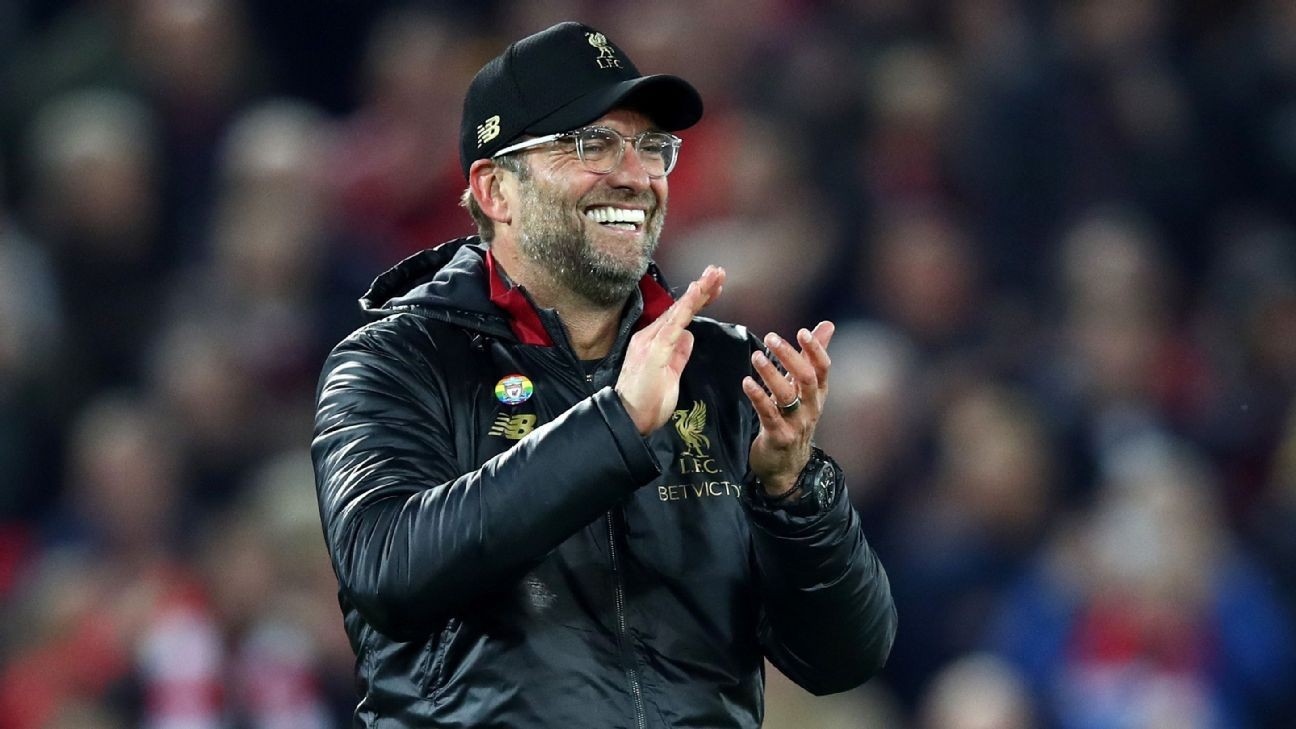 Jurgen Klopp is not interested in any statues being built of him outside Anfield but has vowed to use Liverpool's remarkable history to galvanise his squad as they chase further honours after winning the 2019-20 Premier League title.

Manchester City's defeat at Chelsea on Thursday left Liverpool with an unassailable lead at the top of the Premier League, with seven matches remaining in the season.

The result sparked scenes of joy in Liverpool as fans celebrated the club's first title in 30 years.

Klopp praised the team's consistency over the season at a news conference on Friday -- the team has won 86 points from an available 93 to date -- and promised they will improve ahead of next season as they seek to retain their title.

"The last 13 months have been special for us," Klopp said.

"The consistency is so incredible, I cannot describe it. We will not stop -- we will stay focused.

"We see the opportunity. Not stopping does not mean we will win everything, we just want to improve. The other teams are good already and will be better. [Manchester] City are exceptional. So I cannot promise we will win something but we will do everything to improve. That's, I think, possible. Showing that consistent performing is possible is something I like.

"We get a super push from our supporters, as every two weeks we have the best atmosphere in football. We know how much it means to our people so that gives us a boost. We are in a good situation. We will use our history instead of being held back by it, we're in a good place. We will make sure we're still good."

Klopp's achievements have led Liverpool greats like Steven Gerrard to compare him to the club's legendary former managers, but Klopp is reluctant to compare his feats with the careers of Bill Shankly, Kenny Dalglish or Bob Paisley.

"I'm the manager of this team and we won the league and I'm positive about this -- but you don't have to compare me with these iconic figures.

Klopp's Liverpool are now chasing Manchester City's 2017-18 record of 100 points and have seven matches left to overtake them.

The players will return to training on Saturday as they prepare for the trip to Manchester City's Etihad Stadium on Thursday, but Klopp says the intensity of the run in makes it a monumental challenge to win all of their remaining matches.

"Getting the points tally sounds nice but I'm not sure if it's possible," Klopp said.

"It will be an intense period."

Klopp revealed he only let himself start believing the team would win the title in the final weekend of action before the Premier League was halted due to the coronavirus pandemic, after Liverpool defeated Bournemouth and Manchester City fell to rivals United.

But then came the hiatus, and celebrations were on ice until Thursday evening when it became a mathematical certainty.

"I was always better at dancing than football," he said and he revealed he spent the final 10 seconds of the match at Stamford Bridge FaceTiming his family back in Germany so they could enjoy the moment with him.

"I told them I love them, we cannot be together it's not nice," Klopp said.

"I put the phone on the table and said, leave it on, something's about to happen... that was a really nice moment."

Klopp also paid tribute to his backroom staff and said it'll be a "hard fight" to win the league again next term.

"I'm nothing without my coaches and I'm even less without my players," Klopp said.

"Without the players buying in I have no chance. We will not stop. The boys are in a good age group and we need to use that as much as we can. The others will do a lot to improve their situation - it'll be a hard fight, but that's how the Premier League is."