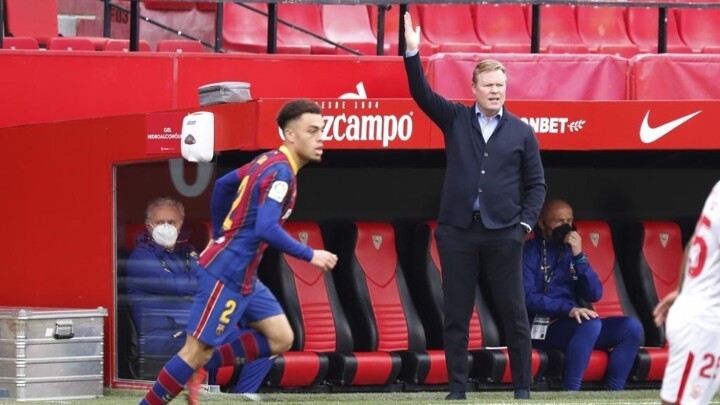 Ronald Koeman commended the defensive work of his players as crucial in achieving a 2-0 win over Sevilla at the Estadio Ramon Sanchez Pizjuan.

The visitors started with three centre-backs and two wing-backs in Nervion - a formation they stuck with for the whole 90 minutes.

"We tried to press our opponent but playing with three centre-backs and high wing-backs," Koeman said at full time.

"It made it easier for us to stop Sevilla playing. That was the key.

"It was a risky system. Without the ball, we pressed, we tried to play man to man.

"Our game without the ball was key. It was a very complete match."

The system left no place for Antoine Griezmann, who watched from the bench as Ousmane Dembele and Lionel Messi combined well in attack.

"It's not a message," Koeman said on Griezmann's lack of minutes.

"We decided to change the system and, to be able to get in behind, we put Dembele up top.

"With the first goal, we said that we needed someone quicker than Griezmann on Messi's side.

"It's not a punishment."

Youngster Ilaix Moriba was one of the players to come off the bench ahead of Griezmann and helped set up Messi for the second goal.

"He was very good," Koeman said on the midfielder.

"He was strong and very calm on the ball after coming on.

"He contributed in the little time he had. He helped us to win."

Barcelona will face the same opponents on Wednesday when Sevilla visit the Camp Nou for the second leg of their Copa del Rey semi-final. The Andalusians lead 2-0 from the first leg.

"We believe, obviously," Koeman said on the chance of a comeback.

"We managed the whole game despite the injuries we had, but Wednesday is another game.

"If we have a complete game, there's a chance."